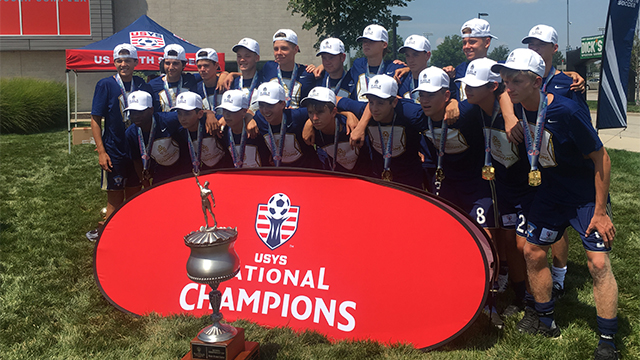 OVERLAND PARK, Kan. -- The 2019 United States Youth Soccer Finals drew to a close Sunday, as 14 teams were crowned champions of their age group.

TopDrawerSoccer was on hand for most of the finals.

The first two finals were U13 Boys and Girls, which were held on Friday night, where 2006 Pipeline SC Pre-Academy of Maryland took down Michigan Jaguars 06 Green by a score of 2-0 to take the boys division while Albion SC Academy Whittaker of California defeated Michigan Jaguars 1-0 to win the girls title.

In the U14s, the boys Championship was claimed by Illinois side Libertyville FC 1974 Elite, who took down New Jersey’s  STA 2005. D’Feeters 05G Black of Texas held on to claim the girls title as they defeated Lou Fusz Geerling 05 of Missouri.

Real Jersey FC beat PA Dominion 04 by a score of 2-0 for the boys U15 title and the girls title was grabbed by SC Waukesha 04 Blue, who took down FC Revolution Dynamo.

From the U17s, Solar 02 Castro won the boys division by defeating Arlington 2002 Red. Cleveland FC 02 defeated Pipeline 02 Pre-Academy Spirit with a 6-2 win in the girls championship.

Lehigh Valley United scored an extra time winner to claim the boys U19 title in 120 minutes over Baltimore Celtic SC 00. The girls title was the largest margin of victory today, with a 9-1 win in favor of Celtic FC 00 Premier, who defeated Lou Fusz Elam.