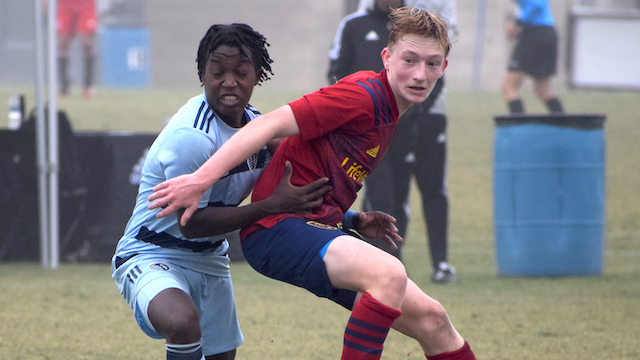 Wellings, a native of Michigan, and Benitez, a native of Arizona, are two of the 11 homegrown players currently on the RSL roster. The Utah franchise has signed 29 players to Homegrown contracts in the club's history. Full details on both of the signings can be seen below.

Real Salt Lake has signed midfielder Julio Benitez from Real Monarchs and RSL-AZ, making him the Club’s 29th all-time Homegrown Player. Benitez’s contract is guaranteed through the 2025 season with an option for 2026.

“Julio has proven himself to be an exceptional talent in our club since the day he arrived in the Academy. He embodies what we strive to develop at our club – athletes who excel on the field and, more importantly, off of it. I have no doubt that Julio will have a positive impact on the field and in our community for years to come," Real Salt Lake General Manager Elliot Fall said.

Benitez, 16, signed with Real Monarchs from RSL- AZ in March of 2021. During his first season as a professional he totaled 392 minutes in nine games played, seven of which were starts. Additionally, Benitez has made two appearances with the U15 U.S. Men’s National Team against Russia and Poland as part of the roster that traveled to Poland for the U15 UEFA Development Tournament.

As of January 11, Real Salt Lake’s current roster headed into 2022 listed alphabetically by position as follows:

Real Salt Lake finished the 2021 season in dramatic fashion, booking its place in the Audi 2021 MLS Cup Playoffs on Decision Day before making a run to the Western Conference Final following a 14-14-6 regular season record. RSL will open the 2022 season on the road against Houston Dynamo FC on February 27 before returning to Rio Tinto Stadium for the home opener against Seattle Sounders FC on Saturday, March 7.

Real Salt Lake has announced the signing of 15-year-old midfielder Jude Wellings from the RSL Academy as a Homegrown Player, making him the first member of the 2021 U15 MLS NEXT Cup Championship squad to ink a professional contract. Wellings contract is guaranteed through the 2025 season with an option for 2026.

“In his time with our Academy, Jude has shown himself to be both an elite prospect on the pitch, as well as an incredibly mature young man off of it. He has established himself as one of the top prospects in the country at his age. We couldn’t be more excited to have Jude and his family committed to beginning his professional career at RSL.” Real Salt Lake General Manager Elliot Fall said.

Wellings, 15, captained the U15 squad to its win at the 2021 MLS NEXT Cup, during which he scored in the first minute of the semifinal against San Jose Earthquakes. In the final match against the Philadelphia Union, Wellings went on to net the game-winning goal in a 2-0 victory.

Since transitioning up to the U17 level at the RSL Academy, Wellings has continued to captain the team, during which he has scored five goals and added two assists in 12 appearances. At the MLS NEXT Fest in December, Wellings was named the Player of the Tournament.

On October 27 at Zions Bank Stadium Wellings made his professional debut for Real Monarchs in the USL Championship. Wellings came on as a second-half substitute for fellow RSL Academy product Christian Nydegger in the 74th minute against Rio Grande Valley FC. Three days later he made his first appearance for Real Monarchs on the road, once again coming on as a second-half substitute, this time in the 73rd minute for another RSL Academy product, Daniel Flores.

Additionally, in November of this year Wellings received his first call-up to a United States Youth National Team camp, being selected to train with the U17s at a training camp in Chula Vista, California. Wellings was one of three players from the RSL Academy selected to attend the camp, joining goalkeeper Fernando Delgado and defender Gershon Henry.

“Extremely grateful to have been given this opportunity by the Club,” Wellings said. “It’s been a dream since I was a little kid to sign a professional contract and I couldn’t be more pleased that it’s with RSL. Every person at this Club has been extremely helpful since I arrived and I’m looking forward to more great things to come!”

As of January 10, Real Salt Lake’s current roster headed into 2022 listed alphabetically by position is as follows: