Three girls in the Top 150 Class of 2014 explain why they made their recent commitments – with the desire to stay close to home a common element. 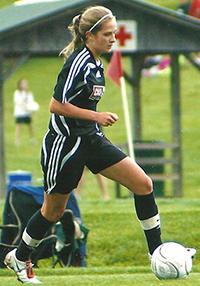 Dominique Babbitt’s search for a future playing destination came to an end earlier this year when she elected to verbally commit to the South Carolina.

Like most top players, it was a long and thorough process.

“I have been visiting schools the last year and attended a lot of camps before coming to my decision to make a commitment,” she wrote TopDrawerSoccer.com in an email. “I was very fortunate to have interest and a number of offers to play in the ACC, SEC, and other conferences, but ultimately my heart was in USC.”

She first set foot on campus at USC five years ago, when an older brother was making college visits of his own. A native of North Carolina, Babbitt was hoping to play in either of the Carolinas, and a positive camp experience helped tip the scales in favor of the Gamecocks.

“When I met the coaches Shelley and Jaime Smith when attending an ID camp at USC, and then some of their players, I felt that they had an extended family atmosphere that I was looking for while being away from home, along with a great soccer environment to improve as a player,” she said.

When thinking about embarking on a new course in a couple of years, the coming challenge is an exciting proposition.

“I feel very fortunate to have the opportunity to play at the next level with such high quality players and coaches, and I hope to make an impact for the Gamecocks,” she said, “with hopes to help them win a National title, and make my very supportive friends and family proud.”

When it came down to making a decision on where to play collegiately, Delaney Fechalos really did her homework after narrowing her choices down to three options.

“I made between 2 and 3 visits over the past year to each school in my top 3 [of Georgia, Auburn and Notre Dame],” she wrote TopDrawerSoccer.com in an email. “I really liked the campuses, the style of play of each team and the coaching staffs.  All of my visits went very well and it was a very tough decision to make.”

Eventually, the Bulldogs won out, as she made her decision and commitment to the SEC powerhouse in May, while also considering Auburn and Notre Dame.

Ultimately, the appeal of staying close to home helped to tip the scales in favor of staying in her home state.

“My preference is to remain in the south, which was one of the reasons that I chose Georgia,” she said.

A native of Michigan playing at Vardar, Taylor Timko isn’t going too far from home for school. Her choice of Michigan to continue her playing career was a pretty straightforward one.

“When I was making my decision, the deciding factors were location, the soccer program, the academic program and size,” she wrote TopDrawerSocccer.com in an email. “I knew that I wanted to play at a big Division I school.”

Timko hadn’t looked too far away from home in the recruiting process, making stops at Ohio State, Wisconsin and Kentucky along the way. But in the end, the Wolverines won out, with a strong desire to not stray too far away from her region.

“I also wanted to stay relatively close to home because my whole family is in Michigan and I am the oldest of three kids in my family so I didn't want to go far,” she said.