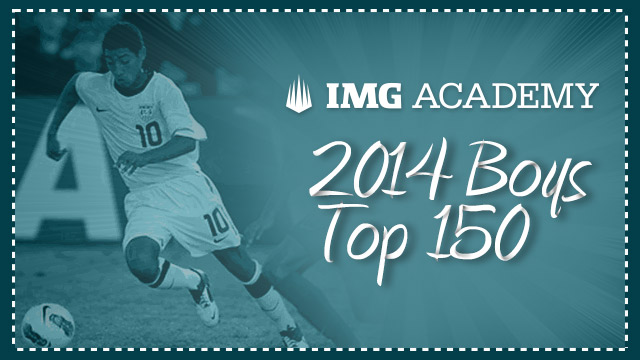 The IMG Academy Top 150 Rankings update for boys in the 2014 graduating class is out today. Michael Seaton climbs from #43 to #19 on news of his January homegrown signing with DC United. Seaton, a forward, will play on loan with USL Pro league member and DC United affiliate Richmond Kickers for the 2013 season.

Columbus Crew forward Nathan Kohl and CASL defender Evan Krause also continue to climb the ranks with this update, landing at #22 and #85 respectively. Kohl, a Michigan commit, made the travel roster for the U.S. U17 Men’s National Team’s trip to Panama last month, and Krause, who is committed to North Carolina, continues to perform for CASL’s U18 squad which has allowed the fewest goals in the Southeast Division.

In addition to the IMG Academy Top 150 update, we have made key changes to the regional rankings which will be unveiled throughout the week. Some of the additions include DC United defender Joshua Bender, Minnesota Thunder defender and Wisconsin commit Rahim Omar, Oakwood forward Logan Gdula, and Georgia United midfielder Jad Arslan. Keep checking back to see who else made the lists.