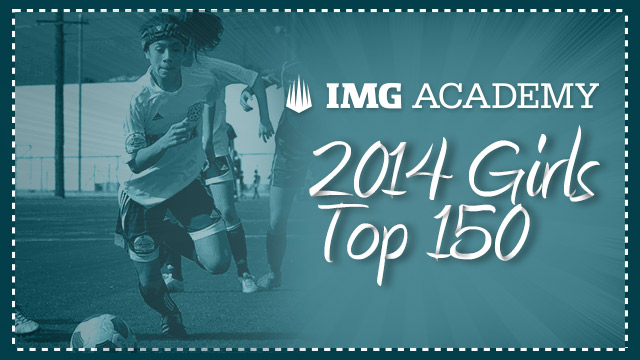 Please note that all IMG Academy 150 and Regional player rankings are only accessible with a Premier Membership. Find out why we made the change and how you can take advantage of our current Premier Membership promotion.

The 2014 Girls IMG Academy Top 150 Rankings fall update is out today. The top five remain unchanged with this update, and #1 Andi Sullivan continues to set the pace for this age group. The Stanford commit is currently competing with McLean Youth Soccer’s U18s in the ECNL, instead of her usual Bethesda SC, in between camps with the U20 and U18 national teams. Bethesda SC Ellis Pierre said that it was important she continue to compete at a high level while his team was on hiatus for high school soccer. It’s no doubt McLean is happy to help her along, as she has led the team to an undefeated 4-0-1 record at the midway point of the fall season.

Moving up the ranks of the IMG Academy 150 are a couple of players who have been getting a look from US Soccer, and a couple who have received multiple recommendations from our scouts, most notably Texas Rush defender and TCU commit Michaela Abam, Colorado Rush midfielder and Georgia commit Rebecca Rasmussen, Sporting Blue Valley center back and Vanderbilt commit Cristina DeZeeuw, and Pleasanton Rage goalkeeper Alexandra Nicholas, who is headed to Notre Dame(w). Click here to see where they are ranked.

There are several players getting a first ranking late in their youth careers. Gretna SC defender/midfielder Megan McCashland, Sporting Blue Valley forward Allie Hess, and Penn Fusion forward Haleigh Echard debut on our list at #51, #71, #92, respectively. McCashland, who will head to Notre Dame(w) next fall, is a discovery player for FC Dallas this year, making the 600+ mile commute to Plano from Lincoln, Nebraska for matches in the ECNL. McCashland also attended US U18 WNT camp in August. Hess was injured for much of the last year, but is finally healthy and leading her team to the top of the ECNL Heartland Division as well as the #6 spot in the Grande TeamRank standings. Finally, Echard has received recent call-ups for the U18s, and will head to Penn State(w) in 2014.

Not only has the IMG Top 150 received scrutiny, but the regional lists have been updated as well. Keep checking back this week as we unveil newcomers such as Maryland United forward Sheridan Street, Match Fit Academy midfielder Kelsey Burke, Pac Northwest SC forward Natalie Vukic, and many more.