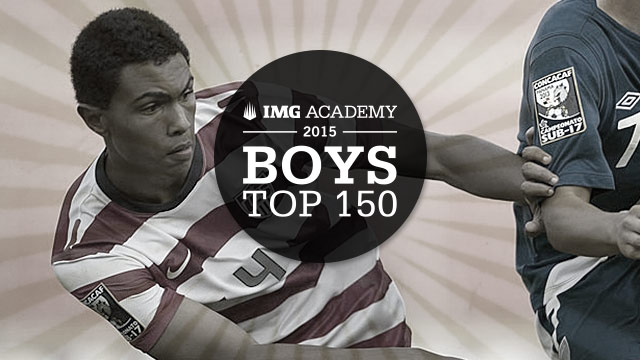 The final update for the Class of 2015 Boys is in the books, and a few players took this opportunity to show us that they deserve a mention as we close out this class before college signing day February 4.

The top 20 have all made their mark, either internationally, as an MLS homegrown signee, or with a verbal commitment to a top college program, but six players have put an exclamation point on their high school careers in the last several months. Sean Dedrick, Alessandro Campoy, Ryan Clark, and Edward Opoku all debut in the IMG Academy 150, while Sean Dedrick and Eryk Williamson make significant moves up the ranks.

Williamson moved from club side Arlington Soccer Association to join DC United’s Development Academy system this past summer, and has thrived under the watchful eye of Coach Tom Torres. He debuted in our rankings in the fall at No. 104, but his 10-goal performance in league play (leads the team), and his inclusion in two U18 MNT camps during the fall including the tournament in Spain lifts his ranking to No. 55. He's also been invited to join United's first team at preseason training this January. Sierakowski made his verbal commitment to Michigan State over a year ago as a top goal scorer with Sockers FC Development Academy side. He has spent this season with Chicago Fire, earning a Best XI nod by our staff at the Academy Showcase as well as an invitation to the U18 MNT, and raises his ranking from No. 113 to No. 70.

Dedrick, a midfielder/defender from Beachside SC’s Development Academy, earned his first youth national team call-up with the U-18s in October and made the most of the opportunity, being touted as one of the best at the camp. Dedrick will follow his brother Kyle to Notre Dame next year, and debuts at No. 49. Campoy, a midfielder from Weston FC, is a former member of the U17 Haiti National Team, and like Dedrick was one of the top players at camp in October, earning the No. 77 spot in our rankings as a result.

Opoku, at No. 147, proves that the Development Academy isn’t the only route to success, having spent his years playing with Millbrook School and as part of the Right to Dream Academy. He earned a spot in the High School All-American game in December and caught the eye of the Virginia coaching staff, where he recently made his verbal commitment. Finally, Clark at No. 148, a goalkeeper from Indiana Fire, has had a break out year, earning praise for his shot-stopping ability at the Academy Showcase, even in a loss to New York Red Bulls, and has committed to Butler.