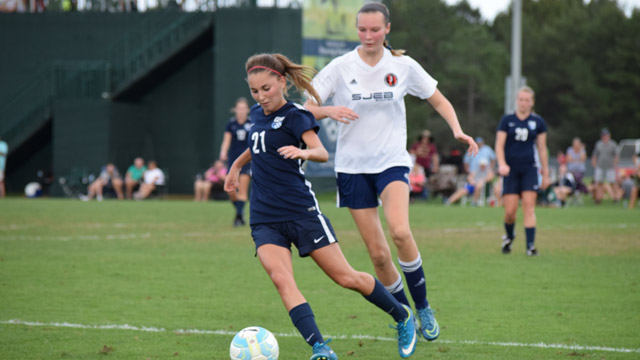 The Disney Girls Soccer Showcase returned for another chapter Thursday at the ESPN Wide World of Sports Complex. Players were anxious and maybe a little nervous, but by the end of each game, things had settled down a bit as day-one winners reigned.

Campton got the better of Triangle during the opening half of the first game at the Disney Girls Soccer Showcase, but Triangle’s second half saw them battle back, maintain possession and exit the game with a 2-0 victory.

“We came out sluggish the first half and the second half was much better,” Triangle head coach Tom Misuraca said. “We emphasized effort and the pace of the game dictated to let us knock it around a little more.”

Campton got the first two quality chance of the game, the first from the foot of Hannah Rittenhouse that sailed just over the cross bar. The second one may have hurt the team’s hopes a bit as it was a goal that got waved off because of a foul inside the box. Saydie Holland sent a set piece into the box that the keeper mishandled and Rachael Lutter was there to tap in the goal that was immediately waved off.

But Campton got a little revenge in the 45th minute when a Triangle corner kick taken by Sylvia Soler was bent into the top right corner of the net that was ruled no goal again.

Campton did break the goose eggs in the 51st minute when Soler played a set piece into the box and Shadae Nicholas was there for a one-touch goal. They iced the cake in the 71st minute when Bridget Barret received an errantly played ball into the bottom left corner.

The Sunrise Sting managed to somewhat manhandle Lou Fusz during the entire game, as they were in possession of the ball for most of the game while Lou Fusz struggled to take it away, and it showed as they came out of day one with a 2-1 victory.

“Anytime you win the first game of a showcase, you’re always happy with that,” Sunrise Sting head coach Steven Shewey said. “The first half, I thought we controlled the flow of the game, could’ve easily had a couple more goals that we let slip away. Second half we were on our heels a little bit.”

Sunrise’s Julia Grosso got the first chance of the game in the 4th minute when she clanked the right post. But her team would rally and tally in the 20th minute when Morgan Sherman made a run down the right side from about 40 yards out, cut toward the center, split three defenders and put a left footer in the back of the net.

Isabella Dorosy made it 2-0 in the 36th minute on a set piece from Chloe Zamiela. Zamiela played a perfect ball into the box and Dorosy snuck past the defense to one-time it out of the air.

But Lou Fusz didn’t go away easily as they tallied a goal in the 63rd minute to make it a match. Kelsey Lanham threw the ball into the middle of the box to Anna Durnin, who tapped it to Sarah Sodoma for the nestle into the back of the net.

IMG Academy lived up to its name of being a school for breeding athletes as it rolled to a 2-0 victory over Michigan Rush Northville using many players from its U15 team.

“We only had a few players from the original team. The rest are U15 players,” IMG head coach Jorge Cruz said. “It took them a little bit to kind of start to know each other playing in a game.”

IMG got on the board in the 21st minute when Haley Triplett played a long ball up toward the box. Dana Curtis made a run to the ball and got a right foot on it to send it into the bottom left corner.

Playing stellar defense, IMG secured the victory with a second goal in the 58th minute. Enzi Broussard got a pass while running down the right sideline, made a 30-yard run with the ball, cutting toward the right post before beating a sprawling goalkeeper with her right foot.

Florida Elite may be playing the tournament in their home state, but they came out the gates sluggish and never really seemed to find their footing in a 3-0 loss to SJEB.

“The first half, a little nervous, they settled down in the second half,” SJEB head coach Steve Wacker said. “That kind of sparked us just to get that one goal.”

SJEB managed to find iron twice before they found the back of the net, but after doing so, they piled on the markers. The first goal came in the 43rd minute when Mia Lugiano played a perfect head ball into the back of the net off a set piece.

Less than a minute after the first tally, Camryn Tirado found space in the box and buried the ball into the bottom left corner of the net.

Madison Batra got in on the scoring in the 56th minute, sealing her team’s fate as victors. She got the back-breaking goal when she found space and knocked in a left footer to seal the game.