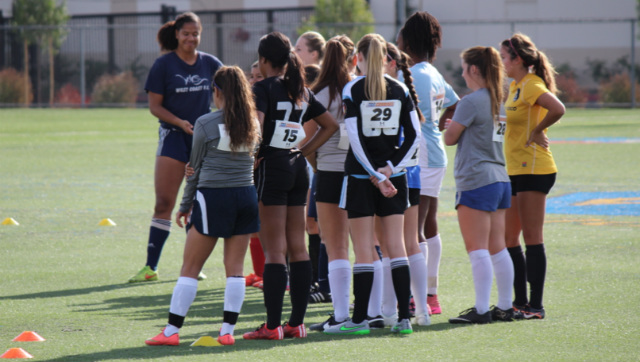 The final TopDrawerSoccer Unsigned Showcase of 2015 touched down in Los Angeles. Coaches from all over the state and from a range of divisions had a chance to see some of the players on display.

Below is a look at the girls Best XI from the event.

GK Madison Girard, De Anza Force (2019): Girard is a great shot stopper and has very clean hands. She made some top saves during full field games and showed good foot work throughout the day.

D Perla Hernandez (2016): Hernandez is technically and athletically very good. She showed composure passing out of the back and chose the right moments to dribble out of the back. She is a smart player who did well intercepting possession and playing simple.

D Courtney Klump, Players SC (NV) (2017): Klump put in a solid defensive performance during small sided and full field games. Strong on and off the ball, good speed and stamina, she made herself hard to beat. On the ball she passed well.

D Kaci Stewart, California Rush (2018): Stewart has a great understanding of the game and is a very solid overall player. She is comfortable on the ball, has a good first touch and passed well out of the back – she kept things simple. She showed good awareness of when to step and when to hold and communicated well. The most impressive element of Stewart’s game on the day was how well she worked under pressure – she remained calm on the ball.

D Kate Collins, West Coast FC (2018): Collins was impressive on both sides of the ball. She has good speed and strength and used her body well – especially when under pressure. She reads the game well and showed good vision with forward passes.

M Valerie Swisher: Swisher spent most of the day out on the right wing, picking up the ball deeper and making some crafty runs forward to create opportunities. She organized and talked to her team mates throughout the games, which led to her receiving a lot of the ball. She tallied a great goal in the first half after some good movement from out wide, she slotted a simple shot past the keeper.

M Claire Villalpando, LA Premier FC (2018): Villalpando was dangerous on the ball going forward during full field games. She is skillful on the dribble and played some good through balls, showcasing her vision. She is calm on the ball and has a good attacking mindset.

M Summer Herrera, Fresno Diablos (2018): Herrera showed class under pressure in the small sided games and in tight spaces during full field games. She has the ability to find passes out of presser and ping a ball to change the direction of play.

F Aina Adewunmi, Westside Breakers (2019): Adewunmi is a strong forward who can hold the ball up and bring other players into the game. She had some good finishes around the six yard box – picking up scraps.

F Karina Buford, Beach FC (2017): Buford likes to run at defenders and create 1v1 situations, which resulted in Buford beating the defender/getting a shot off more often than not. She has speed and strength and is hungry for goals.

F Trinity Watson, San Diego Surf (2018): Watson was the standout player on the day. She controlled the entire game, floating around the middle and final third, linking play, running at defenders and taking shots from distance. Watson scored a screamer during full field games; picking the ball up on the half way line turning sharply to beat the defender, connected a few passes then picked the ball back up just outside the 18 yard box and smashed it into the top corner.