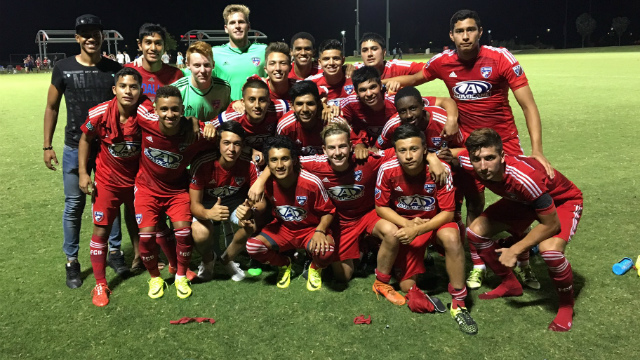 Eight teams are left in the current Development Academy season, as the final stretch of the playoffs takes place this week in Carson, California.

A national champion will be crowned on Saturday in the wake of Thursday’s national semifinals. FC Dallas is the only club in the DA with a shot at both U16 and U18 crowns, though it’s going to be far from an easy task.

All games previewed below take place on Thursday, July 14 and will be available to watch via U.S. Soccer’s YouTube channel.

Rampaging through the playoffs on home turf, FCD now faces an MLS opponent for the second straight game. Their firepower comes from everywhere: whether it’s Jesus Ferriera Castro (who scored a hat trick in the quarterfinals) or the promising BRyan Reynolds, there are a number of players up front that can create chances or score themselves. Brandon Servania is the unsung hero in the midfield, and neutralizing him to win the midfield battle could be what the game hinges on.

Chicago pulled away in a tight affair against Weston FC, scoring three goals in extra time as it seeks a second straight DA championship (the U18 squad won it all last year). Andrew Akindele continues to assert himself as a consistent goal scoring threat, and if this game turns into a shootout, he’ll need to be the focal point in the final third. Anthony Markanich continues to play at a high level, while Vitalis Takawira is another key in the attack. There’s one thing particular about the Fire – they are playing well at the right time of the season after overcoming a slow start in the fall.

A team ripe with Division I commitments, Real Colorado is built for knockout soccer. With an elite forward up front in Rhys De Sota, and a defense that features the likes of Jared Jungjohann, Damen Marcu and Bailey Heller, they can buckle down and hang with the best teams in the country. With just one goal conceded in the four previous playoff games, there’s no question where Real’s strength lies.

Shutting down the LA Galaxy attack is going to be a tough ask, of course. The LA attack cracked the 100 goal mark in the regular season – though weren’t the overall team leaders in goals per game – and can turn it on when the stakes are high. Experienced youth international Eric Lopez gives LA a presence in goal that few teams can match, while midfielder Carlos Anguiano is another gem of a prospect. Goals can come from a number of different sources, whether it’s Jonathan Estrada or Kevin Negrete. Scoring first is going to be especially critical in this matchup, given where each team's strengths lie.

This should be an incredibly compelling matchup between two teams well equipped at both ends of the field. Brothers Josh Burnett and Chaz Burnett both stepped up in a big way to fire the New Jersey club past the Union in the quarterfinals, while U.S. youth national team forward and Wake Forest recruit Isaiah Young can easily put defenses on their heels. UCLA recruit Kevin Silva in goal is arguably the best 'keeper of any team still in the mix. There’s no doubt PDA is a team built to not just win on Thursday, but also win it all.

That being said, it’s going to be a tall task shutting down a Vancouver offense that can be incredibly prolific at times. Five different goal scorers popped up in the 5-3 quarterfinal victory against Sacramento, and the two-headed monster of Gloire Amanda and Daniel Sagno are capable of wreaking havoc in the final third. Perhaps the Whitecaps will really go for it and bring youngster Alphonso Davies down to Carson to add yet another weapon.

It was a hard-fought win against Sporting KC that propelled FC Dallas into the semifinals, though it’s going to be a difficult task for the MLS side to go all the way, given the likely absence of stud midfielder Weston McKennie. There is enough talent available for FCD, however, whether electrifying winner Devin Vega or outside back Reggie Cannon. If someone can step up in midfield to link play between defense and attack, McKennie’s absence may not be as significant. Regardless of McKennie making the trip, FCD is going to be a tough out no matter who steps between the lines.

The opportunity for another win against an MLS Academy sits in front of Nomads, a tough and determined side that defends well and has faced its share of strong opponents this season. Midfielder Adam Vargas scored the game winner in the quarterfinals, while Robert Castellanos remains a key man at the back. Augustine Williams could also leave his mark in this game, as Nomads look to take advantage of an undermanned FC Dallas.