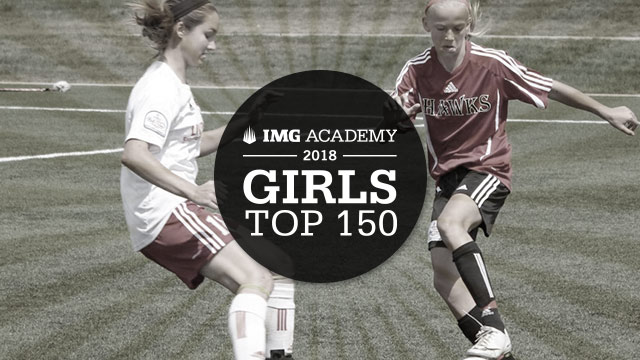 The 2018 girls IMG Academy Top 150 update is out today, and the top five of Alexa Spaanstra, Rachel Dorwart, Jaelin Howell, Jordan Taylor, and Allison Schlegel remain the same, but there are many changes and additions to mention as these players finish their first semester of high school. The first four are all becoming mainstays of the current U.S. U17 Women’s National Team cycle, and Colorado Storm’s versatile Shlegel has been in attendance with the U14 GNT as well as being the leading scorer for the Storm’s U16s, who remain undefeated in conference play.

The most significant change to the top 20 is the rise of Tophat forward Rachel Jones, climbing from No. 20 to No. 14. Jones is another forward making her presence known on the national scene, and if her contributions with the U17 WNT at the last two camps wasn’t enough to hit the spotlight, her nine goal performance in the US Youth Soccer National League opening weekend should be shining like a beacon. The unstoppable Jones finished the weekend with two hat tricks, a brace, plus a single goal to hand her team first place in the Blue Division heading into Disney later this month.

Scattered among the rest of the rankings are players who came highly recommended based on their play in the fall season, or with national and regional teams in the last couple of months. These players either increased their ranking or make their debut with the IMG Academy 150 with this update.

West Coast FC defender/midfielder Kailey Smith, Solar SC defender/forward Karlina Sample and midfielder Sydney Simmons, D’Feeters forward Taylor Moon, and Boston Breakers midfielder/forward Madeline Mills are just a few of the many we will mention. Smith, who jumps to No. 43, is a current member of the U14 GNT and has four goals and five assists to her credit for WCFC’s U15 squad. Sample and Simmons are key reasons for Solar’s 11-0-1 record and top five ranking in the Grande Sports Academy TeamRank Top 25. Sample, now at No. 62, has superior organizational ability in the back, and is one reason her team has only four goals against on the season, while Simmons, at No. 88, spent time with the U14 GNT in October. Moon climbs from No. 140 to No. 115 and her ability to beat defenders on the dribble has led to a team-leading nine goals and two assists for D’Feeters U15s. Finally, Mills, at No. 124, was a participant at US Club Soccer’s id2 program in September, and is receiving interest from some top college programs.

Not only has the IMG Academy Top 150 received scrutiny, but the regional lists have been updated as well. Keep checking back this week as we unveil newcomers such as Carlsbad Elite midfielder Kayleigh Webb, Ohio Elite midfielder Lauren Dietz, Lutherville SC defender Julia Dorsey, Minnesota Thunder defender Isabelle Conlin, Albertson SC outside midfielder Alex West, and many, many more.