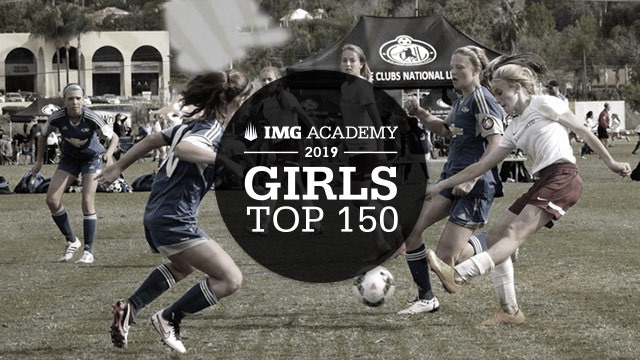 The IMG Academy Top 150 rankings update for girls in the 2019 graduating class is out today, and U.S. U17 Women’s National Team member Kennedy Wesley is the new No. 1. The So Cal Blues defender was outstanding at the CONCACAF U17 Women’s Championship, earning a spot on the Best XI team for the tournament. Slammers defender Kate Wiesner also earned a starting spot at the tournament, slotting in at No. 3.

FC Dallas midfielder Hollyn Torres and San Diego Surf midfielder Madison Mercado are two more players in the top 20 making moves with this update. Both were standouts for the U15 GNT in a recent scrimmage. Torres is the second leading scorer for her FC Dallas U14 side, while Mercado helped her Cal-South ODP team to a Region IV Championship run in January.

There were more than a few players outside of the top 20 that have improved their position with this update, as well as some that debut throughout the list. Among the rising stars are San Diego Surf defender Sydney Sparks, Charlotte Soccer Academy goalkeeper Ruth Jones, Solar defender Serena Eboh, Concorde Fire midfielder Giselle Washington, and Texas Rush forward Colleen Feagins.

Sparks is a defender for Surf’s U15 ECNL team that is undefeated in ECNL play and has given up just six goals in 13 matches. She was named to the TopDrawerSoccer Best XI for her performance at the 2016 ODP Championships as part of the 2000 Cal-South ODP team that didn’t concede a goal on its way to a national championship crown.

Jones makes her first appearance on our list after earning a spot in the TopDrawerSoccer second XI for her play at the ECNL Sanford Showcase in December. US Soccer took notice as well, inviting her to participate in the most recent U15 GNT camp.

Eboh is a defender on Solar’s U15 ECNL team which has conceded just two goals in conference play this season. She is a TDS Unsigned Showcase alumna, where she earned a spot on the Dallas Showcase Best XI in November.

Washington is a midfielder on the top team in the U15 ECNL Southeast Conference. She just wrapped up play with the Jamaican U17 Women’s National Team for the CONCACAF Championships, where she played every minute of every match.

Feagins is the leading scorer for the Rush’s U15 ECNL team with nine goals in 21 matches and has competed with Rush select teams on several occasions.

In addition to the IMG Academy 150 update, we will unveil the regional rankings throughout the week. Some of the players on our list include Crossfire Premier outside back Rose Young, Davis Legacy midfielder Maya Doms, Tennessee SC Defender Harper White, Jacksonville SC midfielder/defender Sydney Hauth, St. Louis Scott Gallagher-IL forward Blake Clark, and many, many more.

So that’s it. You can see the newest version of the rankings herex