One of the greatest challenges for a Development Academy coach is a factor that inevitably creeps into every team’s season.

Rust from the high school season and the few-month layoff that interrupts the momentum each coach works so hard to establish.

The teams in the USSF Academy U16 Southeast Division are tackling that very trial right now.

While the Florida clubs like Weston FC, Clearwater Chargers and Kendall SC have been off since December and won’t resume until March, the division-leading South Carolina United Battery is preparing for a four-month break that will last until June. 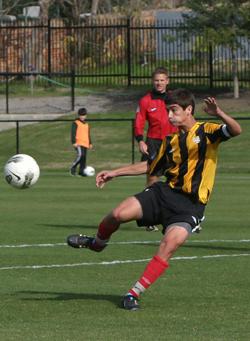 With a satisfying record of 15-3-3 this season and the division virtually in hand, you’d think South Carolina would be resting most comfortably at the finish line. But they may in fact have the most to lose from all this inactivity.

“It’s a challenge,” said U16 South Carolina coach Robert Strickland. “We’ll try to get some friendly competition in during that time frame at the end of February. Once you do get them back (from the break) you almost have to regroup with a minicamp. You have to get them back in good habits and adjust them to the speed and training.”

Every team contends with the same issues at different times (except the teams that have gone to a year-round schedule, eschewing high school soccer), but a South Carolina lapse might be the only hope the Southeast Division has of catching them.   Concorde Fire sits in second, having been defeated rather handedly by the first-place team on two occasions, and Georgia United looms in third but the gap is significant.

South Carolina has found a great mix of youth and experience and they’re attacking opponents with conviction.

James Carlin, a 6-foot-4 striker, has paced the team with 20 goals this season though he’s far from the only threat on the roster.

“Our team has a very attacking style of play. It makes us strong because we have multiple players who are a scoring threats,” said forward Rex Epps, a 1996 who is one of the youngest players on the team.   “We have a very direct style of play and are really good on the counterattack. I feel confident enough in our ability as a team that we have a good chance to win against any team as long as we use our strengths.”

The group’s back line, which features returners Philip Tran, Lewis Schooler and William King, is also a cohesive unit that can be called a strong suit.   Having reached the postseason year ago, South Carolina appears to be a lock to return.

Concorde Fire forward Cameron Mosely likes his team’s chances to reach another postseason as well, if the squad can do a better job finishing off matches.

“Throughout the season we have given away games because of mental weakness and mistakes on the field,” said leading scorer Moseley. “Once we have more consistency we’ll be difficult to beat.”