Looking at the schedule for the Development Academy this weekend makes it appear that even my Sunday league team could get a run in, as there is an overload of fixtures on the deck for the elite boys club soccer league.

From coast to coast, teams take the field for one of the final times this season, as the Academy Playoffs are only seven short weeks away. 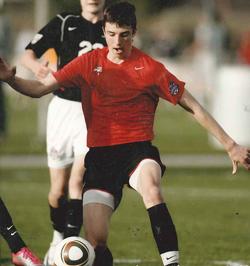 The home side has not give up a goal since March 17, a streak that has lasted seven games now (6-0-1). PDA may have its hands full with Bays’ attackers Yaw Amankwa and Jacori Hayes.

The New Jersey clash is just one of many games that will have the attention of scouts across the country. Check out the preview from some other top matchups below.

New York Red Bulls U18 will look to bounce back from their first defeat of the Development Academy season on Sunday with a game against the Montreal Impact. NYRB is now 14-1-4 on the campaign and sits in the top spot in the Northeast Division. Impact is outside of the playoff picture and still trying to make inroads in its first Academy season.

In the Southeast Division, CASL Chelsea FC Academy is trying to hold onto first place in the U16 age group with games against Kendall SC and Weston FC this weekend. William Gauger, Stephen Megaloudis, and James Street pace the CASL attack with 20 goals between the three.

The U18 matchup between CASL and Weston has implications for the division standings as well, as the Florida club holds the top spot in the standings heading into the weekend. Danny Jensen and Nicholas Pappacena have been prolific in the attack with 37 goals between the two.

Shattuck-Saint Mary’s Soccer Academy U18 has a chance to move level on points with Indiana United Fire Academy at the top of the Mid-America Division with a six-point weekend. SSM heads to Chicago this weekend for a game against Sockers FC and then racks up the freeway miles by heading north for a game against FC Milwaukee. SSM is hoping Michael Bajza’s goal scoring streak continues, as the NC State commit has goals in three of his last five games.

In the U16 age group, Marquette recruit Andrija Novakovich continues to slice through defenses on a weekly basis, as the attacker has already found the back of the net 12 times in only 10 games this season. Novakovich and his Chicago Magic PSG teammates hit the road for games against Internationals SC and Crew Soccer Academy this weekend.

Real Sal Lake Arizona makes the bus trip to Southern California this weekend for games against Chivas USA and LA Galaxy. All three teams are jockeying for playoff position in the U18 age group, as the season quickly winds down. The Chivas USA U18 squad is desperately in search of wins as it holds one of the final playoff spots.

In the Northwest Division, De Anza Force makes the trip to Vancouver for a game against the Whitecaps on Saturday and then a clash against Crossfire in Seattle on Sunday. Force U16 is top of the division and trying to hold onto that coveted spot with only three games left on its schedule.