Few youth organizations have enjoyed as much success at developing players for the professional ranks as FC Dallas and the Dallas Texans over the years. 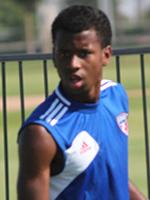 The two Academy sides squared off this weekend in Frontier Division action as well, with the MLS side coming off as the big winners from the two matchups. Goals from Kellyn Acosta and Daniel Nevarez earned the U18s a come-from-behind 2-1 win over the Texans for FCD to open the weekend.

An early goal from recent SMU-commit Jordan Cano in the second minute provided the platform for FCD’s U16s to cruise to a 3-0 win and make it two wins on the weekend. Antonio Aguilar and Sebastian Gordillo also got their names on the score sheet.

The wins kept both FCD squads in first place in the division based off their points per game.

The New York Red Bulls U18s refuse to lose. The only remaining undefeated team in Academy play kept its record alive thanks to Alex Muyl’s goal late in the first half, as they drew 1-1 against Albertson SC. New York’s U16s, enjoying a successful season of their own, won 2-0.

A matchup of Weston FC and South Carolina United Battery U18s produced a high scoring, entertaining affair, as the Florida club won 6-3. Ricardo Castro scored a hat trick for the winning side, while Dakotah Millard scored twice in a losing effort. Weston U16s also won 3-1 on the weekend.

The goal scoring exploits of PDA U16 and U.S. U15 BNT forward Daniel Barbir continues to progress. The youngster came off the bench and scored two goals in two minutes in the second half as the New Jersey club defeated McLean Youth Soccer 5-1. It was a similarly successful outing for PDA’s U18s, which won 4-2 over the Virginia side.

First place in the U18 Southwest Division is Real So Cal for the time being. The California club defeated Real Salt Lake AZ 3-0, the score line padded thanks to two late goals. The two U16 sides battled to a 2-2 stalemate, keeping RSL in first place in that age group.

Second half goals from Connor Corrigan and Bradley Shaw led Indiana Fire Academy U18s to a 2-0 win over their partner club, the Chicago Fire. Chicago U16s had an early edge in the other matchup between the two teams, taking a 2-0 lead thanks to first half goals from John Moderwell and Oscar Gonzalez. But Indiana Fire struck twice during a nine-minute span in the second half to come away with a point in a 2-2 draw.

Future Furman freshman and U.S. U18 MNT defender Trevor Haberkorn scored two goals for his Solar Chelsea U18 side, as they defeated Texans SC Houston 2-0. Bryson Asher and Toryima Asom got the goals for the U16s, as they beat the Texans by an identical score line to round out a successful weekend.