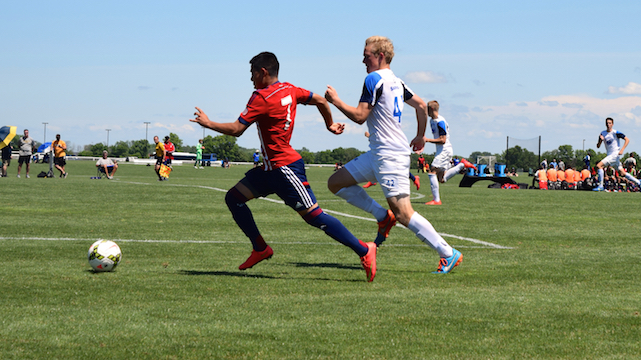 WESTFIELD, Indiana - The 2014-15 Development Academy Playoffs kicked off on Tuesday with both the U16 and U18 age groups in action. With so many games, most of the fields at the Grand Park Sports Complex were busy throughout the day.

TopDrawerSoccer was on hand for the action. Below is a recap from some of the games that TDS saw on Tuesday.

Chicago Magic PSG U18 took a big step forward on Tuesday in its quest to return to Los Angeles for the Development Academy finals in July. Magic defeated FC Dallas 2-1 thanks to a pair of first half goals from Sani Itopa.

Itopa’s first chance came in the 21st minute when U.S. U18 Men’s National Team midfielder Emmanuel Sabbi played in a brilliant through ball behind the FC Dallas defense for Itopa. FC Dallas goalkeeper Matthew Karasinski came off his line and took the ball off of Itopa’s foot right at the top of the box.

It was a minor delay though. Itopa responded in the 23rd minute with his first goal of the game when he volleyed home a cross.

One minute later, Itopa doubled the lead when Sabbi won the ball back and then dribble through a few weak challenges before playing it to Itopa’s feet 12 yards from goal. Itopa took a touch and then placed his shot to the bottom right corner of the net. Karasinski got a glove on it, but it wasn’t enough to keep it out of the net.

FC Dallas answered back with a chance in the 26th minute when Oscar Romero tried to take on the left side of the Magic defense. Romero was tripped up in the box and the referee awarded a penalty kick.

Magic goalkeeper Konrad Dziedzic blocked the initial shot from the spot, but Romero put home the rebound to bring FC Dallas back to within a goal.

At half, Itopa was substituted off, which took a bite out of the Magic attack. In the second half, FC Dallas pushed to find the equalizer.

In the 51st minute, Martin Salas picked off a lazy pass across the Magic defense and then fed the ball into Santiago Agudelo. Dziedzic did well in the 1v1 situation and turned away the shot from Agudelo.

In the 59th minute, it looked like FC Dallas may have found the equalizer when a header hit the back of the net. However, the referee whistled a foul on an FC Dallas attacker prior to the goal.

Magic had a golden chance to put the game away when Stephen Payne sent in a perfect cross for Sabbi on his late run to the far post. Sabbi missed the frame with the placement of his header though.

FC Dallas had chances late, but nothing that really threatened Dziedzic’s net. The center back pair of Nathan Sakevicius and Ricardo Pimentel did well against the pressure from FC Dallas.

The last remaining remnant of Chivas USA is making the club proud. The Chivas USA U16 team battled to a 1-0 win over Sockers FC on Tuesday in their opening playoff game. UCLA commit Ivan Gutierrez scored the game-winner midway through the second half on a brilliant individual run.

The two teams were pretty even throughout the game with both keepers coming up with key saves when called upon.

Gutierrez had the first chance of the game in the 2nd minute when he struck a free kick from 25 yards out that grazed the far post before going out for a goal kick.

The best chance in the first half came when Gutierrez intercepted a pass across the back and noticed that goalkeeper Alexander Budnik was off his line. Gutierrez hit his shot from 40 yards out that was on target, but Budnik made an acrobatic save to push it over the crossbar.

Derek Dodson had the best chance for Sockers when he only had to beat the keeper from eight yards out, but Edwyn Gutierrez made the save.

Ivan Gutierrez’s goal came in the 57th minute when he sped past the Sockers FC defense and ripped a shot into the upper corner of the net.

Sockers best chance of the second half came from Sean Lynch when he combined well to set up a shot just outside the box. Lynch’s effort hit the top of the crossbar.

Chivas USA held on late to pick up the big win to start group play. Chivas USA faces Real Colorado on Wednesday. Dockers FC looks to bounce back with a game against San Jose Earthquakes.

It was a game that Real So Cal would rather forget on Tuesday. Nothing went right for the Southern California squad in its playoff opener against the Northeast Division champions. However, that’s how most teams have felt when playing against BW Gottschee this season.

The swarming midfield press and the organized defense made Real So Cal struggle to build up any sort of attack over the 80-minute game.

Meanwhile, Dylan Nealis made the Georgetown(m) coaches smile with a sublime performance from the right back position. Nealis finished with a pair of assists, which was only part of the story. He dominated that side of the field throughout the game and constantly frustrated Real So Cal.

The first goal came in the 19th minute when Nealis crossed it to the far post where Matthew Swain headed it down toward goal. Sean McGowan was there to get a touch, but the ball may have already crossed the line before McGowan put his toe on it. Either way, BW Gottschee took the early lead in one of the first clear-cut scoring chances of the game.

With two minutes left in the half, BW Gottschee added another. Kevin Lozada did the hard work to track down a through ball and gain control of the ball inside the Real So Cal box. Lozada played it back to Conor McGlynn, who put the ball into the upper corner of the net.

Real So Cal made a number of adjustments at halftime including taking off U.S. U17 Men’s National Team midfielder Eric Calvillo, who was relatively quiet in his 40 minutes of action.

Real So Cal had more of the ball in the second half, but they did not generate many scoring chances with the possession advantage.

BW Gottschee added another to the score in the 59th minute when a long goal kick was flicked onto Christian Villalobos, who battled through one tackle before putting the ball past Esquivel and into the net.

Real So Cal will look to bounce back tomorrow against GA United, while BW Gottschee takes on PDA.