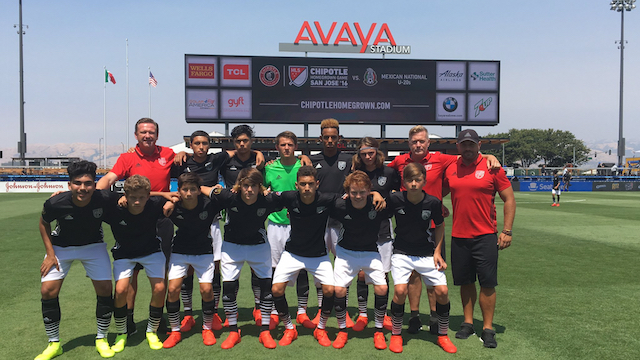 MLS All Star Game week is one of the most hectic on the schedule of the year for the league. Along with the game, there are a number of other social gatherings going on as the sponsors get attention while around the headliners of the domestic league.

As part of that circus, adidas snuck in one of the best-player centric events of the year with the generation adidas Elite Soccer Program (ESP). It is set up to bring together some of the best players from MLS academies from every franchise.

This year’s edition of adidas ESP took place from July 25-29th in San Jose, alongside the big All Star game. The main attraction for on the field activities of the week for the adidas ESP players was the East vs. West games in Avaya Stadium before the MLS Homegrown game.

The game was just one of the scheduled competitions that adidas put on for the players during the four days in San Jose.

“The event was great,” Gary Lewis, the Philadelphia Union U14 head coach and one of the coaches for the adidas ESP event, told TopDrawerSoccer. “It was all about the players. The boys walked into a room full of adidas program. It was like Christmas morning. There was a barber, a DJ. It was basically everything that a boy would want. There was adidas product everywhere for them to have and wear.”

Decked out with the newest products from adidas, the players spent the week meeting and playing with and against some of the other top players from each MLS franchise.

“There were two players from each club selected,” Lewis said. “There were exceptions along the way, but that was the standard. The level was very high.”

The roster for the 2016 adidas ESP, which can be viewed below, included 48 players. Seven of those players were born in 2002 while the rest of the group was made up of players born in 2001. U.S. Youth National Team regulars Michael Pellegrino, Taylor Booth, and Luis Arriaga were some of the more notable names in San Jose.

Lewis also highlighted the play of Roberto Ydrach, Colman Kim, Elijah Le, and Lucas Areco. He was complimentary toward the commitment and willingness of the players to try new positions for the East vs. West games.

Lewis was one of three coaches selected to work the event. Portland Timbers’ Larry Sunderland and James Clarkson from Houston Dynamo were also there as part of the staff. While the trio of experienced coaches imparted their wisdom on the players during the brief spell in San Jose, the hope was the players gained more from their competitors and teammates during the four days.

“For them, it was about looking around and seeing the best players in the country,” Lewis said about the takeaways from the event. “It was about the players thinking that ‘you know what I can compete against these guys.’”

The players returned to their clubs after getting the experience of playing in Avaya Stadium as well as a week of fun and games with some of the best players from MLS academies as another successful adidas ESP event went into the books.