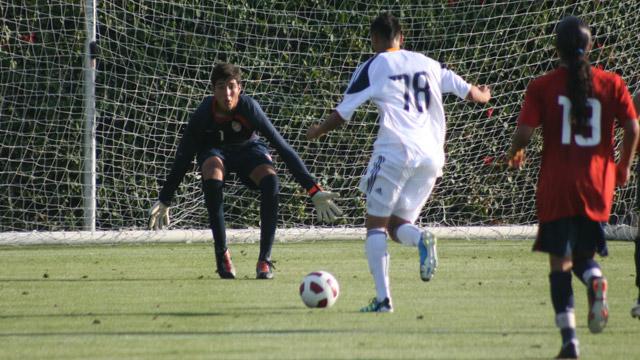 CARSON, California – There are three sides to the U.S. U14 BNT scrimmages on Thursday night at the Home Depot Center.

There’s the way the U14s began each match; how their second-half subs breathed life into the action, and, of least importance, the final scores.

The U.S. side dropped a 3-2 match with L.A. Galaxy before losing to Cosmos Academy West 2-1, but that’s hardly the story.

Against the Galaxy, the U.S. side spotted their opponent a 3-0 first-half lead before bringing a lineup onto the field that seemed to make a personal challenge out of trying to complete a comeback – and they nearly pulled it off.

It was the start that put the team in the hole, however. Goalkeeper Christian Herrera started in goal and did his best to limit the damage, but it was a tough go for him at times. 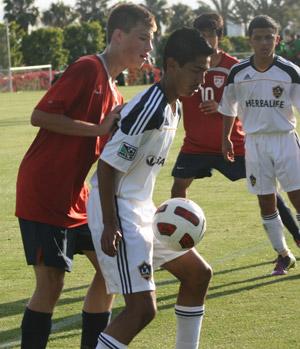 U14 BNT vs. LA Galaxy
Defender David Chavez showed some great fight on the ball during the lopsided first half, but there wasn’t much else that was positive. The U.S. lineup didn’t possess the athleticism or playmaking ability to keep their opponent honest, and as a result the Galaxy lived around the goal.

“In the first half we didn’t play so well as a team. In the second half we worked well and really tried to finish it,” Elias said.

Within the first few seconds of the final half, Elias made a nice long run down the right wing that was more productive than anything the team accomplished early on. It was a signal that things would be different.

The U.S., including Lindley and Wilson in the center, took emphatic control of the midfield over the older opponents, and striker Dixon strutted his stuff with a pair of goals.

The U14s pushed extremely hard to get the equalizer but ran out of time – even though they had clearly made their point by the end of the match.

“We wanted to beat them but it was a hard deficit being down 3-0,” Elias said. “We’re disappointed we didn’t win, but the way we played we had heart and left everything on the field to try to get that comeback.”

The second match against Cosmos played out in much the same way, just minus the big deficit. The U.S. side started with a lineup that included: goalkeeper Jonathan Klinsmann, defenders Pablo Pelaez, Guillermo Bermudez, Billy Abdallah and Tommy Redding; midfielders Alejandro Vergara, Edward Venta Yepes, Abuchi Obinwa and Christian Ramirez along with strikers Andre Garcia and Daniel Crisostomo.

The first half ended without a score though the Cosmos had plenty of chances. Klinsmann, playing in his first camp, was one of the silver linings of the opening half. He showed great hands and good reaction time on some difficult saves.

Vergara, or “Messi” as his teammates call him, is waist-high in height but very conspicuous on the field. Naturally he’s very fast, but he showed a level of athleticism and leaping ability that was surprising. He is somewhat raw, and can use work on his distributing of the ball.

The U.S. found life in the second half by way of their subs. Most of the attacking unit was replaced with Collin Fernandez, Chester Castellaw, Coy Craft, Josh Perez and Amirgy Pineda.

Fernandez and Pineda in particular were very active during the half. They made their presence felt early with a nice sequence that saw Pineda back-heel a pass near the left side of the box where Fernandez stepped up and directed a score near post with his strong left foot.

“I saw that both defenders (in front of the net) were going to the other side of the goal and I redirected it,” Fernandez said. “We moved the ball a lot better in the second half. We got everyone wide and everyone was working harder.”

The U.S. would give up two late goals: one on a beautiful free kick that was practically indefensible, and a second when goalkeeper Justin Vom Steeg came off his line to pursue the ball but was beat to the ball by a Cosmos player.

The U14s again found themselves grinding for a tying score until the very end – when the match ended with Craft taking a lunging shot that just sailed wide at the final whistle.

Craft, back from a spring playing in Uruguay, played hard and tough during a good showing, as did defender Bermudez who had some great attacking ideas out of the back.