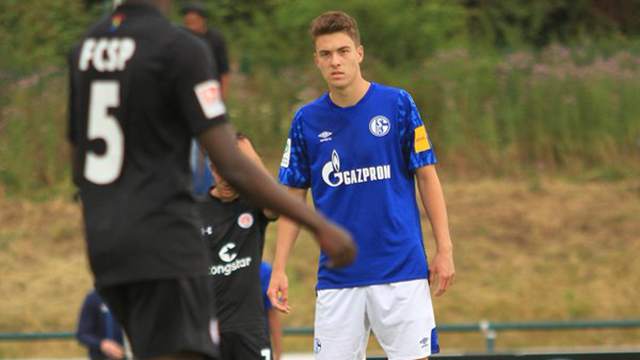 As the top, college-bound talent from the class of 2019 head to their respective programs this summer, one of the best has left the country.

Matthew Hoppe became one of the latest rising U.S. youth soccer standouts to pursue a professional opportunity in the Bundesliga when he signed with Schalke at the end of his senior year.

Hoppe, a native of Yorba Linda, California, signed with the Bundesliga side and is in the middle of his first pro preseason, as opposed to preparing to join San Diego State for the Pac-12 campaign.

“It was a tough decision to have to sacrifice my eligibility and not go to college,” Hoppe told topdrawersoccer.com. “But I think for my long-term soccer career it was the best decision to make… it’s a dream come true. I think that the opportunity to possibly be able to play in the Bundesliga, one of the best leagues in the world is an amazing thing.”

The Southern California standout began his youth career at FC Golden State, playing several years with the club before a stint with Strikers FC from 2015-17. At the start of the 2017-18 season, he joined Barca Academy in Casa Grande Arizona. During the past two DA seasons, he scored 58 goals in 61 games.

Last season at the DA playoffs, he connected with an agent that would eventually open the door for his trial at Schalke earlier this year.

His trip to Schalke wasn’t his first time abroad. Last December he had a trial with 2. Bundesliga side Hamburg, and stopped off at Dusseldorf for a couple of weeks before arriving in Gelsenkirchen.

In the middle of all that, Hoppe was included in a small group of Barca Academy players that traveled to Barcelona, for a chance to train with La Masia and get exposure to the vaunted youth academy.

“We were there for nine days,” he said. “We did a few training sessions and we did two games. It was a great experience – we had a tour of the stadium, we got to watch a game and it was cool to be able to play with them, see the level, and I think that all of us were able to fit in well. Even at that level, at one of the most profound and most known youth academies in the world… American players were able to compete over there.”

Hoppe feels like his experiences helped get ready for the big move from California to Europe. After all, he’s spent the past two years away from home, living at Casa Grande while competing with the Development Academy squad.

Along with that, his past two seasons in particular made the various trial experiences easier to handle.

“I feel like Barcelona has done a great job in preparing me and helping me know how to fit in at a European club and they’ve shown me a higher level, especially with my team and the level of practices that we have,” Hoppe said.

Before heading over to Germany at the end of June, Hoppe played his last few games in a Barca Academy shirt, starting at the Under-18/19 Development Academy playoffs (his side fell short of making it out of their group).

Now, he’s in the midst of preparations for the A-Junioren season. Born in 2001, Hoppe is eligible for Schalke’s U19 side, where he’ll have the chance to cut his teeth at the same club as Americans Weston McKennie and Nick Taitague are currently rostered.

He’s eager to get started and extremely thankful for the chance.

“Schalke is a world class club with amazing facilities, great staff and supporters,” Hoppe said. “Their coaching staff and Directors are also some of the best in the world and they have produced many successful players including Mesut Ozil and Leroy Sane. Everything fell into place and my manager, Emmanuel Bondzie, of Bond MG, Management did an amazing job of introducing me to Schalke and getting this completed. I am thankful for all of his hard work and belief in me.”