Here is the Players To Watch Team of the Month in July for the Southern California region.

Remember, this feature is to honor top performers in their region across the span of age groups. There will be a boys' list and a girls' list, and a new region will be covered every weekday, Tuesday through Friday of each month. You can submit nominations at teamofthemonth@topdrawersoccer.com .

Dylan Shackelford, Albion SC U16 (White), Left Back: Dylan, a member of the Albion SC U16 boys team since U8, is the current team captain. He is a “difference maker” who excels at setting up defensive plays that lead to the U16’s offensive attack. Dylan’s balance, timing and athleticism have made him known for his “crazy” saves off the goal line, tackles and powerful dominance in the air.

Ariel Lassiter, Albion SC U16 (White), Forward: Ari is all about goals, goals, goals! Ari is a naturally gifted finisher who works hard to put away the great chances his team creates for him. Ari can shoot and score from anywhere on the field. He is consistent, extremely fast with and without the ball, and very crafty in 1v1 situations. 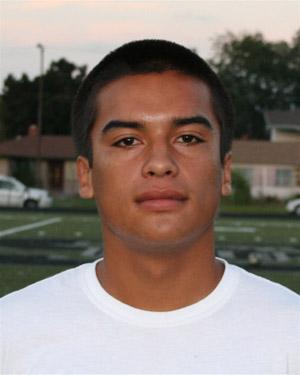 Hugo Cabian
Patrick Barba, Albion SC U16 (White), Sweeper: Patrick, another team member since U8, leads the defense for the Albion SC U16 boys. He is a great physical presence in the back but shows game intelligence in knowing when to run the ball out of the back to initiate the attack. Patrick has great determination, is fantastic in the air, excellent on clearances and a big target on set pieces.

Noah Bunton, Albion SC U16 (White), Center Mid: Noah, another Albion player since U8, is an amazing left footed player just back from injury to play at Regional’s. Noah displays great composure in directing play through the midfield. His calm demeanor has also made him the PK specialist for the team. Also from the midfield, he is an extremely accurate ball distributor who is nearly impossible to dispossess.

Andrew Sanders, Pateadores U17 (Blue), Center Back: Andrew is the leader of the Pateadores U17 boys backline. In addition to be a defensive specialist, Andrew is a versatile athlete who can score out of the back. He provided his team with two goals in two separate games at the Region IV Championships.

Carlos Moreno, Pateadores U17 (Blue), Midfield: Carlos is the longest serving member of this Pateadores U17 team having been with the team since it originated at the U11 level. Carlos is one of the team’s leading scorers and provides assists through his creative play in out of the midfield. Carlos is a play maker that set up numerous goals in the Pats run to the Cal South National Cup Championship.

Marc A. Calderon, South Bay Gunners U13, Forward: The South Bay Gunners Striker and co-captain was selected for the second time in mid June to the U.S. U14 boys National Team and then went on to help lead his team to Region IV Far West Championship.

Jesse Galeno, South Bay Gunners U13, Midfield: The South Bay Gunners U13 boys co-captain is a tireless worker on the pitch. He is consistent in his play, a respectful man who never misses practice and is always pushing himself to improve his game and his leadership of the Gunners midfield.

George Castro, Fullerton Rangers U14 (White), Forward: George exhibits a great work ethic which makes him a role model and leader for the Fullerton Rangers squad who holds the ball very well and is rarely dispossessed. George is a strong presence and big target up top and has provided the Rangers with several big goals in the past few months and at the Region IV Championships.

Carlos Troncoso, Fullerton Rangers U14 (White), Defender: Left Back Carlos was the most consistent player for the Fullerton Rangers U14B squad in their march to win the U14 Region IV Far West Championship. He is a tireless defender and athlete playing every minute of every game for the Rangers at Regional’s. Carlos is very technical, great with both feet and excels at coming out of the back to start the Rangers attack.

Michael Hernandez, Fullerton Rangers U14 (White), Central Midfield/Defender: Michael is “The Motor” of the Fullerton Rangers U14 boys squad. He possesses great stamina covering the most ground of any player on the pitch. Normally playing Center Midfield, the versatile athlete Hernandez stepped up to take on a defensive role during the Rangers run to the Region IV Championship where he shut down several of the top U14 offensive players at the Region IV tourney.

Sarah Roberts, SoCal Blues U14, Center Midfielder: Sarah led the SC Blues U14 in assists leading them to the quarterfinals in Manchester United Cup, Region IV quarterfinals and the Cal South National Cup. Sarah posses great vision and technical ability and has a goal scoring touch.

Jocelyn Orejel, SoCal Blues U14, Left back: Jocelyn is a great physical presence and influential defender. Her tireless work ethic enables her to cover a lot of field. She displays excellent foot skill and technique in both defending and in initiating the attack out of the back. 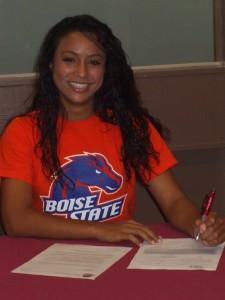 Mikhaila Bowden
Erika Okuma, SoCal Blues U14, Forward: Erika is one of the leading goal scorers for the SC Blues U14 girl’s squad and in her age group. She possesses great physical strength and a powerful shot with both feet. Her speed and work rate make her a very difficult to defend, creative goal scorer.

Sammy Jo Prud'Homme, SoCal Blues U17, Goalkeeper: Sammy made eight crucial saves and stopped 2 out of 3 PKs in the course of play which would have broken the deadlock and gave the opposition the lead. This talented keeper kept three clean sheets – one in the Championship final – and allowed only three goals during the 2011 Far West Regional Championships.

Kasrum James, Legends FC U17, Center Back: Kasrum, the leader of the Legends FC U17 squad, has anchored the defense through Cal South Cup and Region IV play where she and the stifling defense allowed only three goals. Kasrum hit her PK in the shootout to win the Cal South National Cup.

Allyn Brown, Legends FC U17, Central Midfield: Allyn is the Legends FC U17 girls “air specialist” winning everything in the air and then putting the ball into play with directionally accurate headers. Allyn is a consistent and tireless athlete who has played every minute in National Cup and Regional play.

Rylee Baisden, Legends FC U17, Midfield/Defense/Forward: Rylee is a clutch goal scorer and versatile athlete with the ability to play everywhere. Rylee provided the game tying assist in the National Cup Final and then went on to hit her PK in the shootout. At Regionals, she scored two goals in the Legends last pool game to bring the team back from being down 0-2.

Carly Gamble, Arsenal FC U13, Defender: Carly Gamble is often described as “the heart and soul” of the 3 time State (Cal South) Champion and 2 time Region IV Champion Arsenal FC U13 girls. She possesses the innate ability to know when and where she needs to be to shut down offensive threats. She plays with incredible heart and determination inspiring her teammates to battle when they are in a tough game. At any time she is arguably the toughest kid on the field and yet is one of the kindest friendliest people you good ever meet. Carly is the definition of a leader and a teammate.

Marissa Everett, Arsenal FC U13, Defender: Marissa is one of the “edgiest” players on the deep Arsenal squad. Her creativity with the ball coupled with her forward-like speed makes her incredibly dangerous scoring threat. Playing in the Far West Regional’s this year she contributed to her team’s success using her ability to strike with either foot as well as in the air using her head. She sealed Arsenal’s second Regional Championship title in the opening minute of overtime in the championship game when she smashed the eventual game winner into the roof of the net.

Alyssa Carthan, Arsenal FC U13, Midfield: New to the team this year, Alyssa has quickly become a force in the middle and in the air for the Arsenal. In the Far West Regional’s this year she stepped up her contributions by bringing her size and athleticism into the scoring third in a big way. Alyssa fought her way into position on several occasions in order to score headers off corners and crosses and, if that wasn’t enough, she also showed her leg strength banging in goals from outside the 18.

Nicole Leggio, Arsenal FC U13, Forward/Midfield/Defense: Over her playing career, the versatile Nicole has played position on the pitch - from goalkeeper to forward - to help her team to 3 state championships and 2 regional championships. Nicole is the complete player - strong, fast, smart, a great ball handler with a cannon for a foot. In the Championship game at Far West Regional’s this year her team went down 0-1. Nicole quickly took matters into her own hands working the ball down the left side to get a sliver of an opening and smashed the ball near post into the net.

Ally Prisock, Arsenal FC U14, Sweeper: Ally is the Team Captain for the Arsenal GU14 team that recently captured the Region IV Far West Championships. She provided the leadership and will to keep her team motivated and focused throughout their run to the Cal South National Cup and Region IV Championship where Ally successfully led her team to shut outs throughout elimination play.

Katie Pringle, Arsenal FC U14, Forward: Katie had a key role in getting the Arsenal GU14 team through the Quarter Finals against a powerhouse West Coast FC. She had the game winning goal in a 1-0 game. Katie was able to get past 2 defenders before dribbling around the WC goalkeeper to score the game winner.

Angel Meriwether, Arsenal FC U14, Forward: Athletic and creative goal scorer Angel had a stellar final game for the Arsenal FC U14G’s at the Region IV Far West Championship. Angel had an active role in each of the Arsenal’s 3 goals to take them to the 3-0 Championship title. Angel scored a goal, and assist, and then another assist off a spectacular flip throw-in.