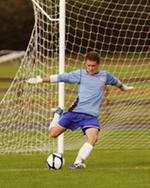 It’s been a unique path for Carl Rubschlager from his club side to a commitment at Loyola Marymount.

Rubschlager is part of a Strikers FC club team that has traveled to Northern Ireland the last three summers and competed at the Milk Cup, one of Europe’s top youth tournaments. In 2012, Rubschlager helped them to a sixth place finish.

Along with that, he spent time in Germany training with Bundesliga side SPVGG Greuther Furth. Now, the focus is on his collegiate future after weighing his options at different schools.

“I seriously looked at Duke, Cornell, Wake Forest, South Florida, Santa Clara, St. Mary's (CA) and UC Davis,” Rubschlager told TopDrawerSoccer.com. “I chose LMU because it has everything I want in a school, great campus, perfect weather, good size and benefit its close to home so that I can have my family and friends watch the games.”

Among other things, he came away impressed by the team’s coaching staff, which is always a strong factor in luring recruits.

“I recently went to their soccer ID camp this past weekend and that was what convinced me,” he said. “Paul Krumpe, Michael Erush and Matthes Mennell have top level training.”

Cole Stevenson has been the radar of many colleges for the past year. The skillful midfielder from Kansas was profiled back in October in our Recruiting Insider series about the chase for his verbal commitment.

“Truthfully, I knew it was the right choice for me after my first visit,” Stevenson told TopDrawerSoccer.com. “I liked everything about it. Not only is the campus amazing but it has both a strong academy and soccer program.”

Stevenson also cited the coaching staff at Denver for making his decision easier.

“The coaches were honest and upfront with me and really showed interest in my future at DU.”

Stevenson is the first commit for the 2014 class for Denver. The Sporting Kansas City product also had interest from Saint Louis, Wake Forest, Fordham, Syracuse, Michigan State, Northwestern, and Memphis.

There is a certain flair to Miguel Jaime’s game, which fits aptly with his bleached hair.

The creative midfielder from Colorado has been a dominating force at the high school and club level in the Rocky Mountain state for the past few seasons including last year where he collected Player of the Year honors for his exploits with Cherry Creek High School.

The success attached the interest of a few schools, but it was a rising program in Florida that got Jaime to give his verbal commitment.

“I knew that Florida Gulf Coast was the best fit after I went on an unofficial [visit],” Jaime told TopDrawerSoccer.com. “The weather is perfect for soccer and the is so young that when I will be there they will all still be playing.”

Jaime said that San Francisco and Jacksonville were also in consideration for his verbal commitment.

“The style of soccer is amazing,” Jaime said about FGCU’s possession-based attacking fluidity. “It fits in with my style and what I am used to here at Rush Academy.”

Midfielder Zach Knudson (PDA) committed to NC State for the class of 2014.

Defender Jake Skoll (San Diego Surf) committed to Davidson for the class of 2014.

Defender Bryce Cregan (PA Classics) committed to Akron for the class of 2014.