A team-oriented attacker who likes to dictate play for his Baltimore Celtic SC side and Broadneck High School in Maryland, Tyler Gabarra found the right college fit at an ACC program that is trending upwards. 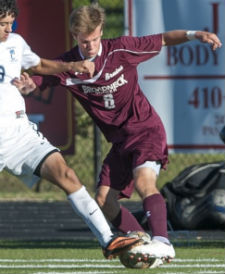 “I committed to NC State because I felt it was a perfect fit academically and athletically, and I felt at home immediately,” Gabarra told TopDrawerSoccer.com. “I love the program's culture and my interaction with the coaching staff.”

Gabarra’s name is a familiar one in U.S. soccer circles. He’s the son of former Washington Freedom head coach Jim, and current Navy women’s head coach Carin. Both played for the U.S. national team back in their playing days.

He spent the past club season playing for Steve Nichols at recently formed Baltimore Celtic SC, and has carved out a series of goals that he thinks the Wolfpack can help him achieve.

“NC State Soccer has incredible team goals and team philosophy,” Gabarra said. “I feel that the coaching staff will help me to reach my full potential as a person and player.”

Off the field, he found that the school had plenty to offer him as well.

“NC State impressed me with the dorms, facilities, classrooms, and academic support they provide,” he said. “They have the tools players need to be successful in the classroom.”

The attacker is one of four players committed to NC State for the class of 2015.

A goalkeeper who takes pride in his ability to make the right decisions – when to come for the ball, distribution, shot-stopping – Colin Hanley found plenty to like about a program in upstate New York.

“Niagara is a very unique program and one that I am really excited to be a part of,” Hanley told TopDrawerSoccer.com. “The combination of strong academics and great soccer program was what really appealed to me. I believe it will give me the opportunity to play and excel on and off the field.”

Hanley was most impressed by the program’s coaching staff.

“From the first time I spoke to Coach Barnes, he was very welcoming and is a coach that I could definitely see myself playing for,” he said. “It was also very interesting to learn that he is a goalkeeper. Not many head coaches are goalkeepers. I feel that this program has a lot to offer and I am very excited to be a part of it.”

Niagara, based near the falls on the border of USA and Canada, liked that the school was a bit on the smaller side.

“At some of the bigger schools, it is easy to become a number in a classroom, but at Niagara that is definitely not the case,” Hanley said. “They also have a strong academic program that fits exactly what I want to study.”

He is the first reported verbal commitment to Niagara for the class of 2015.

Defender Brandon Grueso (Ashburn Soccer Club) committed to Lynn for the class of 2014.