Possessing blazing speed, fancy footwork and a scoring touch, DeJuan Jones has all the tools that coaches want in an attacker. Last fall, he scored 28 goals for East Lansing High School.

He also happened to be a native of the same town as the Big Ten program that he’ll play at one day, recently making his commitment to Michigan State. 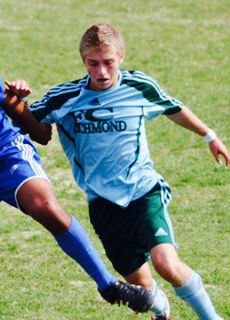 “I was raised in the Lansing area and have always been a Spartan fan,” Jones told TopDrawerSoccer.com. “The Big Ten is a strong conference and I look forward to competing at this level. Also MSU is close to home, so my family and friends can support me.”

Jones liked the team’s style of play, along with the coaching staff that has helped the Spartans make significant strides of late.

In the end, the school was the total package for Jones.

“I know MSU will provide me with the full college experience,” he said. “They have state of the art soccer facilities and the Clara Bell Smith Athlete Academic Center to help me flourish as a student athlete.”

The forward is the fifth commitment for Michigan State’s 2015 recruiting class.

There was a long list of reasons that drew Richmond, Va. native Austin Mann to make his college commitment to West Virginia.

“I decided to commit to West Virginia because it had everything I wanted in a school. It felt very ‘homey’ and to play at a top-notch program like it is, was a huge honor,” Mann told TopDrawerSoccer.com. “I have a few friends on the team and a former teammate that is going to player there, and with how welcoming and great the coaches were to me, I felt very comfortable and more than welcomed to join the WVU soccer family.”

Head coach Marlon LeBlanc has done an impressive job putting the program on the map, and it caught the eye of Mann during his recruiting search.

“It was very structured program, had great facilities, and had a phenomenal coaching staff,” he said. “The style of play that they use fits right into my play, so it was a perfect fit for me. I also noticed on my visit there and while I was at the camps there, that the team really acts like a ‘family’ and all get along great with each other. Not one think I could complain about.”

Mann also liked the prominence of the school’s athletic teams, which was another big plus.

“West Virginia has great school spirit, great sports teams, and a great campus,” he said. “Being a huge sports fan like I am, I wanted a school that has big football and big basketball. It's a perfect college town with a lot of great majors to choose from.”

The defender is the first commitment for West Virginia’s 2015 recruiting class.

A year ago, Ben Lock began to consider NC State as an option during the recruiting process. Eventually, his interest grew and grew to a point that he jumped at the chance to commit to the program in early March.

“It has always been a dream of mine to play in the ACC, and once I began to discover what the NC State soccer program was really about, I knew it was a great fit,” Locke told TopDrawerSoccer.com. “After getting to know Coach Kelly and the rest of the staff, and spending time with guys on the team, I felt right at home. From the campus, especially the athletic facilities, to the program, everything fit together very well.”

The options he saw in the classroom made it the perfect fit for him.

“The academic prestige of the Engineering department of the school was an additional bonus for me,” Locke said. “NC State felt like the perfect balance of athletic and academic excellence, as well as a fantastic coaching staff and a great campus.”

Locke is the third reported commitment for NC State in 2015.