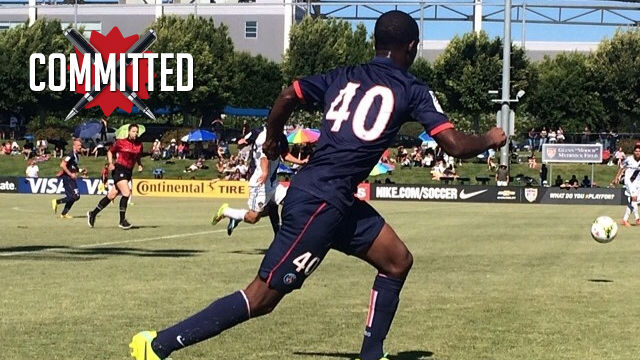 “UCLA has always been a huge interest of mine,” Payne told TopDrawerSoccer. “Once I stepped on their campus for an unofficial visit, I felt a great vibe with the community, the soccer program, and the location of the school as well. What really drew me to UCLA was how well I interacted with both the head coach Jorge Salcedo and the assistant coach Nick Carlin-Voigt. Also my family found that it was the best fit for me as well.”

Payne’s path to UCLA has been windy. He moved to the Chicago area at the start of high school in search of better competition.

“I had to adjust my lifestyle leaving home my for my freshman year for Lake Forest Academy which really made me mature and prepped me for what I will face for college,” Payne said. “Making that move to a prep school really made me grow up. Now making a move to college again which is now far away wasn't really a huge deal for me.”

The commitment has been rewarded though. Payne appeared with the U.S. U18 Men’s National Team at a training camp at the National Training Center in Carson, California in April.

Along with national team scouts, some of the top college programs also took notice of Payne.

“I was considering schools such as North Carolina, Wake Forest, Clemson, and Pittsburgh but my family and I ultimately found the best possible fit for me at UCLA,” Payne said. “I thank God for the schools that recruited me and gave me a chance at their programs but I am also very happy I found the best school possible, which is UCLA.”

Dynamic on the ball and lethal in front of the goal, Payne adds to an already stacked 2015 recruiting class for the Bruins. He joins David Chavez, Pablo Pelaez, Malcolm Jones, Jackson Yueill, David Villegas, Erik Holt, and Matthew Powell for the UCLA 2015 recruiting class.

Orozco is a talented, hard-working, disruptive midfielder who has all the tools to contribute immediately for the Matadors. He sees the game well and should fit in well with Cal State Northridge’s style of play.

The 16-year-old (soon-to-be 17) was a key part of the LA Galaxy U16 squad that recently won the Development Academy National Championship. Orozco shut down the RSL-AZ midfield with a few highlight-worthy tackles and interceptions. The cherry on top of his performance was a second-half strike to seal the 2-0 win.

Fresh off the stellar performance, there was plenty of interest in the prospect, but it was the local’s staff coaching staff that made him select Northridge.

“I loved how they connected with their players,” Orozco told TopDrawerSoccer. “The way they bond with each other is something you can't get at other schools.”

Head coach Terry Davila and assistant coaches Zach Feldman and Peter Bomar have built camaraderie within the squad, which helped the Matadors to their most successful season in 2013.

Orozco said that he was also considering UC Riverside, UC Irvine, and San Diego State prior to his commitment.

He is the third verbal commitment for the Matadors’ 2015 recruiting class. Alejandro Gomez and Erick Villatoro are the other two members of the group at this point.