Boys Commitments: Another for San Francisco A fluid and technically skilled attacking midfielder with an eye for the goal, Bryce Kaminski, looked to the San Francisco Bay area for the right academic and collegiate soccer fit. 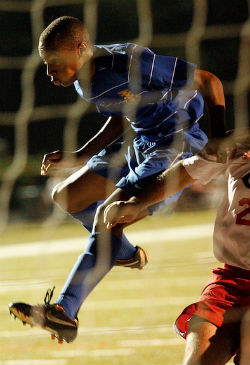 “I choose USF for several reasons, an outstanding soccer program now headed by Coach Soto, a strong liberal arts Jesuit education and the unique qualities of the city of San Francisco and the Bay Area,” Kaminski told TopDrawerSoccer.com. “Coach Soto was very supportive and great to work with throughout the whole process. His vision for me on the team and vision for the schools program were inspiring.”

Kaminski said both the Coach and the City were the draws to attending the Jesuit-focused USF. On his visit, Bryce said that the students he spoke to and Professors he met were all open, sincere and passionate about the school.

“Being very passionate about soccer myself, their passion and school spirit sealed the deal for me,” he said.

Bryce was selected MVP of the California South Coast High School Soccer League after finishing with 26 goals and 11 assists. He scored a goal in four of five CIF-SS Division 1 playoff games. Bryce plays for West Coast Football Club where he is Captain and Offensive MVP.

Recently named as the Louisiana State Player of the Year by the LHSAA, Cameron Robinson, the attacking standout for high school and Chicago Fire Juniors is heading to a South Carolina program.

“I decided to commit to Furman for a number of reasons,” Robinson told TopDrawerSoccer.com. “The campus is beautiful and reminded me a lot of my high school, St. Paul's. I felt a sense of comfort and was content there from my first visit.”

Robinson liked the way the school challenge him on and off the field, as he looks to improve in every facet of his game.

“The rigors of the academics and the overall experience at Furman will, no doubt, elevate my success rate beyond my four years here,” he said. “Not to mention, playing soccer for a school like Furman is an absolute honor and privilege to me.”

The talent level of the current team was another draw, not to mention the players produced in the past.

“Having had the caliber of players come through the program speaks volumes to me,” Robinson said. “The coaches are experienced, knowledgeable, and passionate. I respect their leadership because they believe in their players."

Matt Morgan, a center back from Georga United, has shown a commitment to the game that has awarded him the ability to play at the highest competitive levels, both in the United States and Abroad.

He has represented the ODP Region III Team on two international tours in Guadalajara, Mexico in 2012 and 2013. In 2012 he was one of the key contributors (and sole GA 97 representative) to the Region III’s top performance results in Interregional Showcases in Chula Vista, Calif.

Currently a center back and captain of the Georgia United Soccer Academy U16 Team, he credits his continual growth in the sport to his current coaches (Iggy Moleka and Tony Annan) at United.

He found the right Division I fit in the form of UNC Wilmington.

“My goal is to attend a university where I can make an impact,” Morgan told TopDrawerSoccer.com. “Where we can get to the next level, and I can say ‘we had a goal, we had places to go, and I contributed to something big’.” I also want to be able to continue to develop as a player and continue to get better. Coaches Heaney, Coach Haines, and the coaching staff at UNCW have that same vision. They believe in the program, they have a plan, and they have shown that they believe in the players. It’s a winning combination.”

Defender Calum Bishop (Chicago Magic PSG) committed to Lehigh for the class of 2015.