A starting defender on Sporting KC’s U18 Development Academy squad, the combination of on the field and off the field opportunities drew Jack Freeman’s commitment to Ohio State. 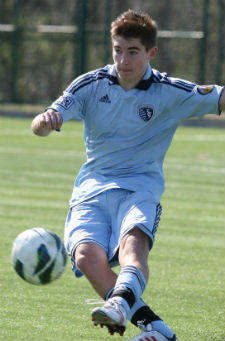 Head coach John Bleum and his 18 years at the helm of the Buckeyes was a big draw for Freeman.

"The coaching staff is very experienced and has a solid track record of success,” Freeman told TopDrawerSoccer.com. “I want to be a part of that. I also have really enjoyed getting to know the coaching staff and feel very comfortable with them and their mindset for the team.”

Playing and competing in the Big Ten was another factor.

"I was particularly interested in going to school and playing soccer in a major conference where we can compete for a championship and where I knew I would be proud of the name on my jersey and OSU certainly meets those objectives,” Freeman said.

The defender has aspirations to work in medicine one day, and he found the right academic opportunities in the classroom to help him pursue that goal while also playing DI soccer.

“It was really important to me to go to a strong school academically,” Freeman said. “Having said that, I am interested in the medical field and OSU has a very highly rated medical program which will really benefit me.”

Freeman is Ohio State’s second verbal commitment for the class of 2015.

Off to a strong start in the 2014-15 Development Academy campaign with six goals in his first eight games, Texans forward Jeffrey Palomarez also figured out his collegiate future after committing to Saint Louis for next fall.

There were a slew of reasons that drew him to the Atlantic 10 program.

“I decided to commit to Saint Louis because of the friendly environment and social people I encountered while there,” Palomarez told TopDrawerSoccer.com. “The campus is beautiful and it has my Health Sciences major. The soccer program has a great history and excellent results over the year, which caught my attention.”

Palomarez could get the chance to supplant forward Robbie Kristo, who is set to graduate after his decorated career with the Billikens comes to an end later this year.

The Texan also found a school with familiar values and academics that will help him develop in the classroom.

“The school itself has a great educational system as it is one of the best in the country, I also like that it is a Catholic school which is how I was born and raised under and the opportunity to be at a school that promotes that is amazing,” Palomarez said.

Eight players are committed to Saint Louis for 2015.

After it coming down to Air Force Academy, Appalachian State and Liberty, Tucker Chasteen eventually picked the Big South program for a multitude of reasons.

“The Liberty coaches are personable, have built a competitive program, and desire to mentor student-athletes in character and values even beyond soccer,” he told TopDrawerSoccer.com. “LU has a growing upside and made it to the Big South Conference final last year losing to a tough Coastal Carolina side.”

A hard-working box-to-box player willing to put in the work on both sides of the ball, Chasteen was selected to play for the Development Academy side NC Fusion, but with the program two hours from home (each way) he opted to excel for his Watauga High School instead.

Chasteen is Liberty’s second verbal commitment to the class of 2015.

Midfielder Jesus Perez (Chicago Magic PSG) committed to Akron for the class of 2016.

Midfielder Thomas Madden (Bethesda Olney) committed to Charlotte for the class of 2015.

Goalkeeper Keegan Meyer (Soccer Association of Columbia) committed to High Point for the class of 2015.