Boys Commitments: Bucknell beef up for 2015 A multi-sport talent who competes for his high school baseball team, Zander Perelman is a forward who uses his awareness and soccer IQ to look for scoring chances.

The Ohio native found a Pennsylvania Patriot League program to be the right package for a Division I home. 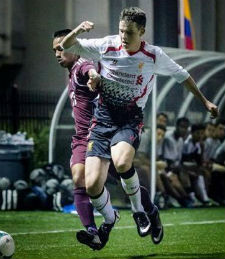 “I decided to commit to Bucknell because they are historically a successful program, as well as an excellent school in regards to academics,” Perelman told TopDrawerSoccer.com. “They offer a program, Animal Behavior, which I could not find at any of the other schools I was looking at, and this appealed to me quite a bit. I was honored that coach Nash gave me an opportunity to play at the Division I level, which is something I have been dreaming of for quite some time.”

Spending a lot of time with the coaching staff and team during his visit left a particular impact on Perelman, who found a close-knit team.

“There was a real sense of camaraderie among the team, something which I really liked,” he said. “The soccer program has also historically been very good, and so this appealed to me as well.”

With a specific major in mind, that also played a significant role, as Perelman didn’t find a number of schools that had the right mixture of school and soccer.

“The school itself was very nice,” he said. “It was kind of like its own little town, which I thought was really cool. It also is a very strong academic school, something which was very important for me when making my decision…All of the educational and athletic facilities were also very nice, and overall I saw it as a place where I could see myself for the next four years.”

“I decided to commit to Bucknell because of the established soccer program, and the excellent education,” Peterson told TopDrawerSoccer.com. “I really liked the coaches and players when I went and visited.”

Peterson’s recruiting search saw him look intently at a number of programs in the Northeast of the United States. But a strong push from the coaching staff eventually helped settle his decision.

“They [the coaching staff] were so welcoming that I really felt like I was at home,” he said. “Also, I really liked the facilities that were provided on campus, for I could really see myself playing on their well groomed grass field.”

He also found a school whose location felt a lot similar to home.

“I loved the New England feel to the campus,” Peterson said. “I’m from New England, so I felt like I belonged there. Also, I enjoyed hearing about the academic opportunities and was impressed with the exceptional team GPA and the percent of athletes that come out of Bucknell with a job.”

Four players are verbally committed to join Bucknell this fall.

A creative, two-footed player from New Jersey high school soccer powerhouse St. Benedict’s, Anthony Gomez knew he had to find a soccer program that would embrace the way he played.

It eventually led him to Iona College in New York.

“I decided to commit to Iona because I loved the small campus, I really like Iona playing style, they’re a very technical program – not a team that plays kick and run kind of soccer – and that fits my style,” he said.

The similarities between himself and those currently on the roster also came into play.

“I really liked that a lot of their players have the same vision that I have,” Gomez said. “A lot of them want to move on to the next level and become professional soccer players, and it's good for me to surround my self around that positive energy.”

Gomez is the first reported verbal commitment to Iona College for 2015.

“My heart was set on Liberty after I attended an ID Camp this past summer on campus,” he told TopDrawerSoccer.com. “It was my first choice before any other schools.

Mbuyu is the fourth commitment to Liberty for 2015.

Forward Philip Hausen (San Jose Earthquakes) committed to Harvard for the class of 2016.

Midfielder Kasey French (Seattle Sounders) committed to Washington for the class of 2015.

Defender Nicholas Cousillas (NJCSA) committed to Stevens Institute of Technology for the class of 2015.

Defender Samuel Junqua (De Anza Force) committed to California for the class of 2015.