The pipeline from Olney BGC Rangers to top Division I men’s college programs is alive and well. 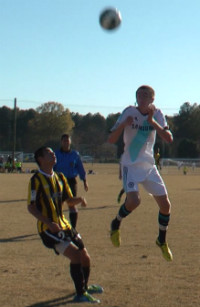 With alumni set to join programs like Virginia, Duke and others in the coming fall, Jeremy Ebobisse is the latest to head to a big school, committing to Duke for the class of 2014.

“The Duke coaches did a good job of informing me about their school,” he told TopDrawerSoccer.com. “It became clear to me that the coaches and I had the same ambition and that they understood what it would take to help me reach the next level.”

A target forward with speed to get in behind and also hold the ball up and link with teammates, Ebobisse takes pride in his versatility. There were plenty of other things he also liked about the soccer team.

“All of the coaching staff seems to have an excellent philosophy of how the game should be played,” he said. “The facilities were excellent and the players greeted me with warm hospitality upon my two visits. I know that the expectations of standard and level of play will be high, which really excites me.”

Off the field, the school had a lot to offer Ebobisse as well.

“Duke is a friendly environment that balances excellent academic with equally strong athletics, topped off by a social community,” he said. “I feel quite confident that I will succeed in all areas at Duke.”

Committing just before the Development Academy playoffs, Dominic Jensen realized a dream by jumping at the opportunity to attend North Carolina in 2015.

“I’ve wanted to go there since I was ten and attended their summer camps,” Jensen told TopDrawerSoccer.com. “It had the right balance of quality academics and a good coaching staff under Carlos [Somoano] and a soccer team that was going to be able to compete for a national championship every year. When I was offered, I couldn’t really say no.”

Having known the coaching staff since that initial camp experience, the North Carolina native didn’t have to spend too much time thinking about whether or not to take the opportunity.

“I really liked the atmosphere of the campus, facilities and the team,” he said. “I felt that it would suit me well.

Goalkeeper Yusuf Ozen (Doug Miller SC) committed to NJIT for the class of 2014.

Defender Matthew Reinikka (Seattle Sounders) committed to Davidson for the class of 2014.

Defender Kyle Walsh (Crew Soccer Academy) committed to Cornell for the class of 2016.