A strong center back who has played in all 15 Development Academy games this season for Oakwood SC, Brendan Hill had long held ambitions of attending the local soccer power. 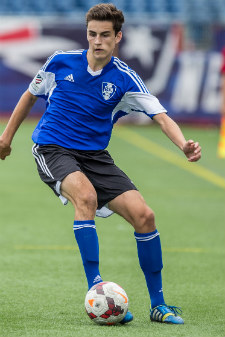 It was a dream he was recently able to realize.

“I decided to commit to the University of Connecticut because I grew up going to games, it is local and one of the top soccer programs in the country,” Hill told TopDrawerSoccer.com.

A defender who has shown a knack for scoring the odd goal here and there – Hill has three DA tallies on the year, a decent return for a central defender – the team’s international flavor appealed to him.

Hill’s commitment also means that he’ll follow in the footsteps of his family members.

“I liked everything about the school itself,” he said. “Both of my parents went there and my brother Connor is there now, it has always been my second home."

Hill’s commitment is Connecticut’s first for 2015.

After capping off a fantastic 2013 season with a national championship, it’s not a shock to see recruits laud the program and school.

That was exactly the case with recent commitment Sean Dedrick.

“I think Notre Dame has the best combination of soccer and academics in the country,” he told TopDrawerSoccer.com. “I feel very fortunate to be recruited by the National Champions and coach Clark in particular. He is a great guy and may be the best coach in the game.”

Family ties to the team acted as another big reason for Dedrick to pick the school and soccer team.

“My older brother Kyle will be a freshman on the team in the fall so I've gotten to know the coaches and the school very well over the last couple years and I'm really excited about going to Notre Dame,” he said.

Dedrick is the first reported commitment to the Irish for 2015.

A hard-working attacking force for his Ohio Galaxies club side, Tristan Lyle’s interest in Wright State was piqued because the school’s comfort level.

“I just felt like it was the right place for me,” Lyle told TopDrawerSoccer.com. “I feel comfortable with the players and coaching staff, and it's close to home for my family and friends to come support me. Overall, I felt Wright State was the best option for me academically, and it's also the home of a great soccer program.”

Not necessarily recognized as a soccer power, Lyle is optimistic that the program has a bright future ahead of it, something he wanted to be a part of during his college career.

The way the team played the game was another plus.

“Their style of play suits me well, and coach [Bryan] Davis' plans for the future really excited me,” Lyle said. “The recruiting classes he was able to bring in was something I just wanted to be a part of.”

Midfielder Tommy Clark (Three Lions FC) committed to Bradley for the class of 2014.