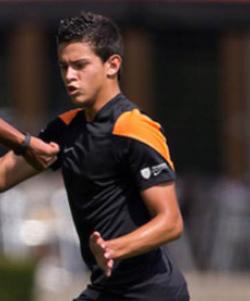 Syracuse head coach Ian McIntyre has big plans for his program. The Orange coaching staff is aiming for supremacy in one of the premier conferences, and they’re aggressively recruiting to make that dream a reality.

U.S. U18 Men’s National Team pool member Chris Gomez is the latest to give his verbal commitment to Syracuse.

“When I stepped on campus I felt that it was a place I could call home and develop not only as a soccer player, but as a student and as an individual too,” Gomez told TopDrawerSoccer.com. “Both coach McIntyre and coach [Mike] Miller are extremely humbling, down to earth people that I would like to be surrounded by. They are both very respected coaches and have really attracted me to their top notch program.”

Gomez’s quick bond with the coaching staff helped Syracuse land the promising outside back.

“They have the same goals as I do and have made it clear to me how we can achieve our goal together here,” Gomez said. “They have made me feel like I belong at the school and have placed their confidence in me to make an impact on the program from the day I get there.”

As for those goals, they are part of the process of taking the Syracuse program to the next level.

“My goal is to win the ACC and compete for a national title,” Gomez said. “I feel as though with the plans and players Syracuse is bringing in, we can do that.”

“[The coaches] see all my attributes going forward and won’t change the way I play,” he said. “They encourage me to attack the way I do as a left back and whipping in crosses and providing scoring opportunities.”

The Union prospect said that he had his eyes on the ACC for a long time so Syracuse’s move to the conference in 2013 certainly helped in his decision.

Prior to his commitment, he said that he had interest from Notre Dame(m), Georgetown(m), Wake Forest(m), NC State(m), Princeton, Brown, and Penn.

“I am humbled for all the attention I have received by some of the best coaches and top programs in the country,” Gomez said. “I would like to thank every for their interest, their guidance, and recommendations.”

Gomez is the third verbal commit for the 2015 class for Syracuse. He joins Adnan Bakalovic (Revolution Empire) and Miles Robinson (FC Bolts Celtic).

A dual-citizen of both United States and Australia – Richardson lives in Melbourne but holds a U.S. passport through his American mother – committing to Furman is a part of a bigger goal for the midfielder.

It’s also required a much different approach to the recruiting process.

“When I was 16 nearing the end of my high school education, I began to plan possible opportunities to pursue my goal of becoming a professional soccer player while also achieving a high level of education,” Richardson told TopDrawerSoccer.com. “In Australia, there are really no opportunities to do this in an integrated manner, you can study and play but they are separate systems. I knew about MLS and how some of the players are drafted out of the US college system.”

With that in mind, Richardson came to the States for camps in the summer of 2013, spending June and July at different programs. It didn’t take long for Furman(m) to catch his eye.

“From the moment I met the Furman coaching team, they have shown a real interest in me both as a person and a player,” he said. “The type of players Furman has attracted and developed in the past is an absolute credit to Coach Allison and the program. The opportunity to play with a team that is serious and talented is very attractive to me. I want to contribute to what I believe will be a successful team over the next 4 years.”

Richardson, along with playing as an attacking midfielder, can slot in as a center back and right back. He just completed a four-week trial with Scottish Premier League side Celtic, which he called “one of the best experiences of [his] life.”

Along with an impressive education and beautiful campus, the team’s style of play as another plus.

“The technical and possession style of play at Furman is exactly what I was looking for,” Richardson explained. “The soccer program has a strong reputation of producing professional players. The coaches are approachable and they have shown a real interest in my development as a player.”