A visit to Ohio State and seeing the campus and surroundings up close helped sway Alex Ofeimu that it was the right place for him. 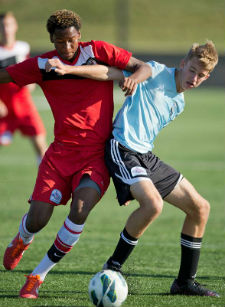 “When I went there, I felt that it was some place that I wanted to be,” he told TopDrawerSoccer.com. “The city of Columbus was exciting. The facilities were amazing. The coaching staff was great and the team was welcoming.”

Ofeimu had a long list of possible schools, leaving no stone unturned during his college search. He visited places like IUPUI, Oakland, Louisville, University of Kentucky, SIUE, Indiana University and Bowling Green. Schools of different sizes and programs of different stature were all on his radar.

“The staff is great,” Ofeimu said. “I met one of the assistant coaches, Ian Gordona, a few years ago at a National Training Center. I thought he was a great coach and hilarious. Head coach John Bluem's record and reputation says it all.”

A campus atmosphere that he labeled as “amazing” was the final piece of the puzzle.

“The campus is huge but you feel like it is all in one area, so it isn't overwhelming,” Ofeimu said. “Moreover, it has a great academic reputation. I know I will get an excellent education.”

He’s the first verbal commitment to Ohio State for 2016.

A product of nearby Arlington SC, Kevin Hwang is a central midfielder who will head into Washington, D.C. to play college soccer.

I would describe myself as a technical, skilled, and speedy player with wide range of vision. Similar to luka modric playing style.

“I decided to commit to George Washington because of its attractive brand of football,” Hwang told TopDrawerSoccer.com. “They play the beautiful game unlike many colleges. The coaching staff was very welcoming when I came to visit. They have tremendous experience and great knowledge of the game.”

While not a recognized national power, Hwang found plenty of reason to be optimistic and thinks that their fortunes will improve during his years at the school.

“GW’s soccer program is definitely on the rise in the Division I level,” he said. “We have many talented players in the program that are ready to compete and fight for championships.”

Helping seal his choice was the classroom opportunities.

“The school itself has an amazing academic program no matter what major you choose,” Hwang said. “Also it’s in the heart of the nation. It is the best of both worlds.”

Forward Brian Hawkins (Washington United) committed to Rutgers for the class of 2015.