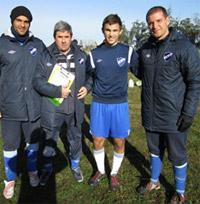 As far as college program histories are concerned, few men’s teams can match what Saint Louis has to offer.And that was one of many things that drew Luis Manta to verbally commit to be a Billiken starting this fall.

“The coaching staff and soccer atmosphere at Saint Louis is what made the decision to join the SLU program quite easy,” he told TopDrawerSoccer.com. “I am extremely confident that with [Mike] McGinty at the reigns I will be able to be a part of a National Championship winning side. The history and fan base around the program also cannot be matched anywhere else in the nation.”

It’s not just the past that counts as well. Soccer’s status in the school’s pecking order was quite obvious – again, a trait that isn’t easily matched by programs overshadowed by basketball or football.

“Going to a school where soccer is considered a big sport is a big plus,” Manta said. “The history and the fact that the program has won ten national championships put the school over the top.”

But that wasn’t Manta’s only criteria. As a player who likes to emphasize his technical abilities, he felt like he could integrate well into the way the team tried to play.

“I feel that I will be able to fit into the side very easily because of their style of play,” he said. “I really like how McGinty emphasizes his team to play attractive soccer and how SLU is a possession oriented team that likes to keep the ball on the ground.”

From a soccer perspective, making the decision to verbally commit to Iona was a pretty simple one for Michael Gottlinger.

“[I liked] the coaching philosophy and style of play – a possession style, not the kick and run style – the stability of the coaching staff with Coach [Fernando] Barboto and his success and tenure there,” he told TopDrawerSoccer.com.

Midfielder Jaime Villareal (LA Galaxy) committed to UCLA for the class of 2013.

Defender Thomas O’Brien (Colorado Rush) committed to Davidson for the class of 2013.

Midfielder Leandro Lemache (PDA) committed to Rutgers for the class of 2013.

Forward Dale Ludwig (SOCA) committed to American for the class of 2013.

Forward Samuel Hayward (Solar Chelsea) committed to Penn for the class of 2013.