Best known for scoring a ridiculous volley in a Georgia state playoff game, Lagos Kunga’s ties to Furman and the coaching staff go back several years.

It makes his early verbal commitment to the program no surprise. 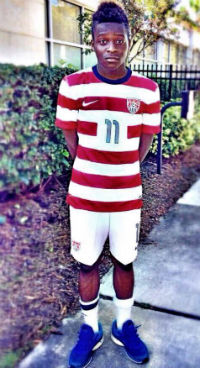 “I have been with Coach Allison for three years, he was my region coach in ODP,” Kunga told TopDrawerSoccer.com. “I have also been to camps, and I love the campus. It’s not too far from my hometown in Georgia. I feel like I have a strong connection with both coach Allison and coach [Anthony] Esquivel. They are really great coaches and I feel like they could help me develop not just as a player but also in life off the pitch.”

His experience playing at the Furman's camps exposed him to the style of play, along with the track record of sending players to the pro ranks.

“I loved their playing style and how they're an attack minded team because I love to attack,” Kunga said. “Their playing style is very similar to my national team, in which we play possession-based soccer with quick combinations to attack. I also like how the players interacted off of the field. They really are a family. Finally, I know Furman has developed some great professional players in Clint Dempsey, Ricardo Clark, Shea Salinas, and Walker Zimmerman.  They have future professional players on the team now. I would like to follow that path that Furman has allowed other players to achieve.”

The university’s size was another plus, as the smaller school appealed to him.

“I really like the small schools and classroom environment, which is what Furman provides,” he said. “Being so close to home also is great for my family and friends to watch me play. Not to mention the campus is one of the most beautiful in the entire world. It is a special place overall.”

Like Kunga, his commitment to Furman stemmed from strong ties with the coaching staff, along with the school’s ability to produce pros.

“I have developed relationships with coach Doug Allison and coach Anthony Esquivel and believe they can help further my development,” Myus told TopDrawerSoccer.com. “I like their style of play and I fit well in their formation. It is an honor to play at a school that has had other greats such as Clint Dempsey, Ricardo Clark, and Walker Zimmerman.”

Myus also liked the opportunity to play college soccer relatively close to home, not to mention the smaller classroom size and picturesque campus.

He is the second verbal commitment to Furman’s 2015 recruiting class.