In need of a starting goalkeeper this fall after the graduation of Andrew Wolverton, Penn State has landed one of the best players in the position for its 2015 recruiting class.

Arie Ammann, currently a scholar at Championship side Watford’s Academy in England, committed last week and will head to State College later this year. 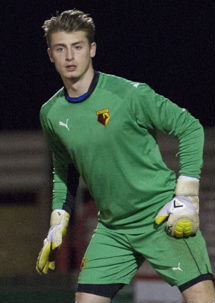 “Penn State's remarkable facilities caught my eye when I first visited,” Ammann told TopDrawerSoccer.com. “The facilities that Penn State have are better then most professional teams around the world. The players and staff are amongst the best in the country, and working with all of that is only going to make me a better player.”

Prior to moving abroad, Ammann was a standout shot-stopper in D.C. United’s Academy, electing to pursue an opportunity in England in the summer of 2013. The son of Mike Ammann, a former goalkeeper for Charlton Athletic and in Major League Soccer, the move abroad challenged him unlike anything had before.

“Playing for Watford has been nothing short of amazing, from the staff and players all the way to the fans,” Ammann said. “It's been a dream of mine to come to England and play and I have enjoyed the experience. Being able to achieve that goal is one of my most memorable accomplishments. Living in a new country and away from my family and friends has changed me, and turned me into a man. I had to grow up and take responsibility at the age of 16.”

From the speed of play to stiff competition for playing time, Ammann said that the past two years have prepared him for the move to college and tremendously boosted his development.

So why head back to the United States for school if he was already in Europe, the destination so many dream of?

“I saw the importance of getting a degree, my career won't last forever and I need to think about what I will do when all of this is over,” he said. “Having the opportunity to do that alongside doing the thing I love is a win/win for me. Being a goalkeeper I know I won't be playing in a first team regularly at a young age and this gives me the game experience I know I need.”

The netminder still carries pro aspirations as he prepares for the next step in his playing journey. Penn State’s goalkeeping staff played a big role in his choice, as he sees it not just as a chance to get playing time, but also great experience from proven coaches.

“Mike Behonic is a great goalkeeper coach and coach [Bob] Warming has proven he is one of the top college soccer coaches and has a history of preparing players for the next level,” Amman said. “Penn State puts together a winning team every year and they look dangerous for any team they go up against. My goal is to win a national championship and I feel this is the best environment to do that.”

Starting in the fall, Ammann will battle with Oregon State transfer Matt Bersano and current Nittany Lions Danny Sheerin and Evan Finney for the starting role at the Big Ten powerhouse.

In the end, a friendly and comfortable atmosphere helped Ethan Pitre make his college commitment final.

“I decided to attend Northern Illinois, because I felt it was a good fit and I really liked how nice the guys on the team were and how the coaches interacted with the players,” Pitre told TopDrawerSoccer.com.

Northern Illinois emerged as the top choice over programs such as Wisconsin-Green Bay, Loyola University and the Naval Academy.

Pitre saw the school as the best option because it offered him everything he was looking for both in school and in soccer.