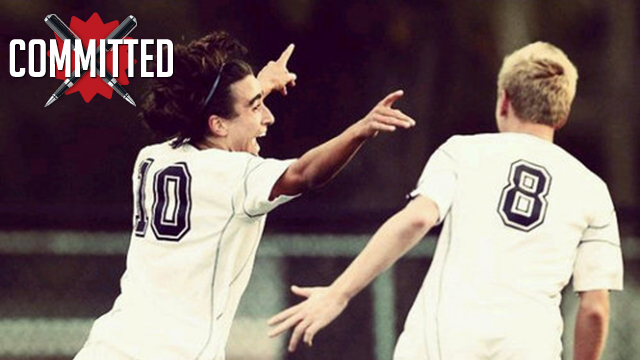 A striker who enjoys playing with his back to goal, Paul Langford won’t be heading out of his home state for school after making his recent commitment to Memphis.

“I wanted to go to a school with a good engineering program,” Langford told TopDrawerSoccer.com. “So I made a list of 10 possible schools. Memphis was right at the top with one other school.”

In fact, the campus is just 20 miles from his hometown of Millington, and he’s grown up a Tiger fan.

He also likes the current talent that he’ll join when he begins playing for the 2013 spring season.

“I have gotten to know and like many of the players and I am sure some of them will play in the MLS,” he said. “I would like to also. And, my family gets to watch me play.”

An attack-minded wide midfielder, Nogueira also won’t be going too far from home after making his verbal commitment to George Mason.

“I decided to commit to Mason for a few reasons,” he told TopDrawerSoccer.com. “First, I see GMU as an up and coming university both from a soccer perspective as well as academic.  I think it is a school to watch in the future and I'd like to be able to contribute to their success on and off the field. Second, the campus is very nice and in a great location. Finally, I know many of the players already there and they know my playing style as well and I think that could be an asset on the field.

He admitted that he really liked the idea of getting the chance to play close to home, as it included several benefits.

“Many students want to get as far away as possible, but I like the Northern Virginia area,” Nogueira said. “My friends and family will be able to come out and see me play for Mason whereas if I was attending an out of state school they probably would only see one or two games a year.”

In the case of Brandon Fuerst, an outside midfielder for his Freehold Soccer Club, getting to make his verbal commitment to Lehigh secured what he was looking for all along.

“Lehigh was one of my top choices from the start,” Fuerst told TopDrawerSoccer.com. “The coach [Dean Koski] showed a strong interest in me as a player. After visiting several other schools I realized Lehigh was a great fit for me, so I accepted Coach Koski's offer for a spot on his team.”

And after having strong interest in the soccer program, Fuerst enjoyed his time at the school itself.

“I visited Lehigh and loved the campus,” he said. “The beautiful sites and fresh, mountain air drew me in. Academically, I hope to be an engineer and I know Lehigh has a strong engineering program. The Integrated Business and Engineering Program that they offer also intrigued me.”

Don’t forget to email your college commitments to us at commit@topdrawersoccer.com