Boys Commitments: In the footsteps You usually find tall defenders playing centrally, but the 6-foot-2 Garrett Muzikowski is a left-footed back that usually plays on the left flank, not in the middle. 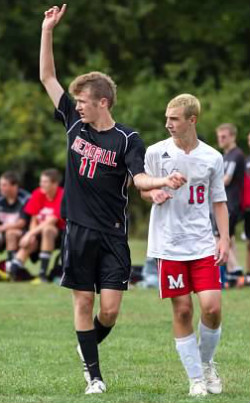 The 2014 grad will get his shot at the next level at D.C.-based school American, a program that he simply raved about.

“I chose to commit to American because I loved everything about it,” he told TopDrawerSoccer.com. “American is the perfect fit for me academically and athletically, and I cannot wait to play there.”

A connection with the team’s head coach played a strong factor as well for the New Jersey native.

“I went to Argentina with the regional team and got to play under Coach Todd West, and he is a great coach,” Muzikowski explained. “I like American's style of play, and how successful they are in the Patriot League. The facilities are amazing, and the field is arguably the best field in the country.”

The school’s location in the nation’s capital played a role in the defender’s decision.

“What I really like about American is that it is in the heart of Washington D.C,” he said. “The campus is beautiful, and the academics are very prestigious. I plan to major in business or communications, both of which American University has incredible programs for.”

Muzikowski picked American over other programs like MIT, Brown, Lehigh, Lafayette and Rider.

A tall goalkeeper standing at 6-foot-3, Craig Duggan sensed that heading south to this particular Conference USA program was the right move for his future.

“I decided on South Carolina because I felt comfortable with the coaching staff and players when I was down there,” he told TopDrawerSoccer.com. “It's a great school with fantastic facilities and support.”

The Gamecocks also have a notable goalkeeping alumnus that certainly didn’t hurt the program’s case either.

“Coach Berson has a great record with goalkeepers; Brad Guzan went through the program,” Duggan said. “I think at South Carolina I can not only get better as a goalie but also help the team win.”

Along with Guzan being an alumnus at the same position, Duggan thought the program’s history also made it a very lucrative playing destination.

“The soccer program at South Carolina speaks for itself with all the conference championships and NCAA tournament appearances,” he said. “Also, I think that with Coach Berson and his staff's experience, it's a school that I know I can compete and become better as a player and person.”

Defender Jacob Icolari (Colorado Rush) committed to West Virginia for the class of 2014.

Midfielder Eli Appleby (Vardar) committed to Butler for the class of 2014.

Defender Kevin Kappock (PDA) committed to Marist for the class of 2014.

Defender Michael Fornaro (Medford Strikers) committed to Rutgers for the class of 2015.