One of the top scorers at the U16 age group last season, Richard Prestridge knows how to find the back of the net in the Academy level. 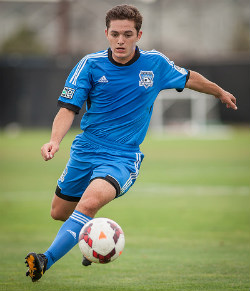 He’ll tackle that challenge next after making a commitment to Orlando-based UCF, a program that caught his eye during the recruiting search.

“Ultimately, it was the connection that I felt between the coaching staff and myself,” Prestridge told TopDrawerSoccer.com. “Being comfortable and feeling that this is the right fit allows me to visualize myself out on the field scoring goals for UCF.”

A player who it willing to do whatever it takes to help his team get the result, the way that UCF plays was another reason to pick the program.

“The first time that I went to UCF to watch the Knights play, I was very impressed with their style of play,” he said. “I liked the way that they played mentally, physically and tactically. It seems like a great fit. I can easily see myself being a part of this program as it grows with high expectations.”

As he neared the end of the recruiting process, Bryson Clark ultimately made the decision to swap his native California for Texas.

“I committed to SMU because everything felt right,” Clark told TopDrawerSoccer.com. “First, the academics appealed to me. Second, the facilities and campus are beautiful, and have everything I want in a college. Third, I felt an immediate partnership and respect for the coaches. They saw me for who I am, which really impressed me. Finally, the team has competitors and the will to do whatever it takes to win.”

The coaching staff helped draw Clark’s commitment to the program, along with the way the team plays. Outside of the soccer team, he came to like plenty of other things about the university.

“I love the size of the school,” he said. “It is big enough to meet new people everyday, yet small enough where you can develop close relationships. Also, they show great school spirit, especially at the football games, which is important to me to be a part of.  The location right in Dallas is great, too.”

Clark also had the opportunity to possibly play for California, but ultimately was fueled by the desire to go outside his home state.

Defender Patrick Khouri (FC Dallas) committed to New Mexico for the class of 2014.