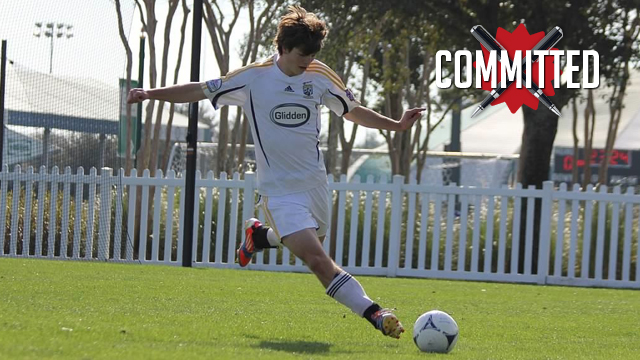 Cincinnati United Premier (CUP) Crew Gold continues to churn out collegiate athletes with impressive consistency. Despite the lack of Development Academy status, the Ohio club has been a hot spot for college soccer coaches in the Midwest and even farther away.

One of CUP Crew Gold U17’s starting center backs recently made his college commitment and discussed the decision with TopDrawerSoccer.com.

This week also features UCLA continuing its hot streak in recruiting for the 2014 with a pair of IMG Academy Top 150 ranked players giving their verbal commitments to the Bruins. The pair of recent commitments pushes the Pac-12 defending champions recruit list to six players for the class.

Thomas Moore, one of the center backs on the stellar CUP Crew Jrs. Gold U17 squad, kept a tradition alive for his Ohio club with his recent commitment. Moore became the third player (in consecutive years) to commit to the Naval Academy in Annapolis, Maryland.

“There were a large amount of reasons I chose to commit to the Naval Academy,” Moore told TopDrawerSoccer.com. “One of the biggest reasons is the academics. They are highly esteemed and a degree from the Naval Academy can make the rest of my life much easier.”

“Knowing a few people at a college before you go there has numerous positives,” Moore said. “It allows you to know what is going to happen/what is expected of you before you arrive and can prepare properly as well as the simple fact that I will be able to feel more comfortable I will already have a relationship with some of the players there.”

The Strikers FC winger packs a punch with his shot that has made him one of the top prospects in the Southwest Division.

Liborio’s lethal left foot has found the back of the net 10 times this season for the Strikers U16 squad, which leads the club in scoring.

The attacker said that he cherished the opportunity to join a team that already includes a number of highly ranked players.

“I have always liked challenges,” Liborio told TopDrawerSoccer.com. “I am a very good performer and playing with and against the best will not only make ma better player but it will make us all a better team.”

He also considered San Diego State, UC Santa Barbara, and Michigan, but the Bruins stood out from the pack.

“Academically and sports wise, I think it is one of the best,” he said about why he picked the Bruins.

Steve Martinez has been a prolific goal scorer at both the club and scholastic level. The Bishop Mora Salesian High School junior notched 27 goals this past season. For his club, he has 12 goals in 13 games with LA Galaxy’s U16 side.

The high output caught the eye of a number of the programs, but it was local program UCLA that sealed the deal and landed the verbal commitment from the striker last week.

“Playing college soccer in my hometown is a dream come true,” Martinez said. “I look forward to representing the pride and tradition of UCLA soccer.”

Salesian has developed quite the reputation of producing talented attacking players with Luis Silva (Toronto FC) and Carlos Alvarez (Chivas USA) passing through the doors.

“Steve [Martinez] is an exceptional athlete and young man,” Salesian coach Mark Johnson said. “I expect that we will have a superb career as a student-athlete at UCLA.”

“The school offers so much in terms of academics,” Delgadillo told TopDrawerSoccer.com. “And that fact that is up here in Northern California . . . what more can I ask for.”

The forward carries a 3.86 grade point average during his junior year at Andrew P. Hill high school, which made him a highly valuable recruit. UCLA, Stanford, Georgetown, and other top schools were also interested in the top scorer from the De Anza Fore U16 squad.

Delgadillo also said that he does feel like some pressure has been taken off his shoulders with his commitment, but he is not slowing on the field, as he plans to work just as hard for his club.

Defender Raymundo Barajas (Chivas USA) committed to Loyola Marymount for the class of 2014.

Midfielder Connor Ryan (FC Delco) committed to Drexel for the class of 2013.

Midfielder Jaime Colin (United FC) committed to Wisconsin-Milwaukee for the class of 2015.