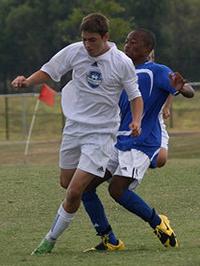 There were plenty of things that appealed to Hans Honer about playing at UNC Charlotte – he’s from there and plays his club soccer at Charlotte Soccer Academy.

But the coaches at the program were the tipping point, and his commitment means he’ll play under Kevin Langan, who is his coach right now for his Charlotte SA U16 side.

“The coaching staff at UNCC is one of the best,” Honer wrote TopDrawerSoccer.com in an email. “The coaches and players are close on and off the field and that is very important to me. This is a big commitment and you spend a lot of time together.

“One of the reasons I chose UNC Charlotte was because I am very familiar with [Langan’s] coaching style. Coach Langan is a pleasure to play for because he is very personable, is a motivator, and has a coaching style that I like.”

That level of comfort made sense for him, and he said that “it felt like the right fit” to make the decision to stay close to home.

The program has made obvious noise of late, making a run to the NCAA Championship last year, and Honer is confident that he’ll have the chance to improve both as a student and athlete.

“At Charlotte I can obtain a top-level education and the tremendous opportunity to play with some of the most talented players in the country,” he said.

A hard-working center back, Fox isn’t straying too far from home to play for Kentucky, just an hour and a half drive away from where he lives.

And while that certainly played a factor, it was the coaching staff that ultimately convinced him to make the commitment.

“What appealed to me the most was the coaching staff,” Fox wrote TopDrawerSoccer.com in an email. “Coaches Cedergren, [David] Casper, and [Erik] Imler had a great vision of what they wanted to accomplish over the next years. In addition, Coach Cedergren stressed academic results.”
He’ll have to wait another year before his collegiate career begins, but Fox eagerly awaits the challenge he’ll face soon enough.

“I am excited to be a part of a Division 1 program and have the opportunity to compete at the highest level of college soccer,” he said. “I am most excited about playing with/against national team players and some of the best talent from around the world.”

Brian Costa is staying in state for school, as he made his verbal commitment to Princeton earlier in the year.

Two reasons stood out to him the most as he was considering where he’d play collegiately.

“An incredible academic curriculum and a great soccer program that has continuously competed for an Ivy League Championship year after year are certainly the two driving factors that led me to commit to Princeton,” he wrote in an email to TopDrawerSoccer.com. “Receiving a very good education while playing soccer at a very high level was something I always strived for since I was a child.”

“I certainly hope to develop and become a better soccer player throughout my future years at Princeton,” he said. “At Princeton, I will undoubtedly look up to the older and more experienced players and take whatever advice I can learn from them. I look forward not only to develop more technically, but also look to become more disciplined and be capable of handling more responsibility throughout the years.”

With seven goals to his name, Steve Eneme is the leading scorer for the top team in the USSF Development Academy's Frontier Division.

Coaches say he has a knack for putting the ball in the back of the net, and Eneme said it his “intuition” that also helped him decide on Santa Clara for his collegiate choice.

“I decided SCU was the right place for me due to my belief in the soccer program and liberal arts education,” Eneme told TopDrawerSoccer.com over email. “I was sold because of the honesty, helpfulness, and hospitality of the coaches during my unofficial visit and phone calls. Additionally, after speaking with different coaches who have coached me in the past, each painted SCU in a positive light.”

The Broncos landed the dangerous striker over a handful of other teams.

“I contacted a plethora of schools because I believed in notifying all the colleges I was interested in so that my decision would be after learning about a variety of places,” Eneme said. “As a result, I learned what I wanted from a school.”

The ODP standout also gave credit to his historic high school, Shattuck Saint-Mary’s, in helping with the process and preparing him for the next level.