Boys Commitments: Outside the Academy A calm and composed center back with good size (standing at 6-foot-5), Evan Libke found enough to like about SIUE that convinced him to go from British Columbia to Southern Illinois. 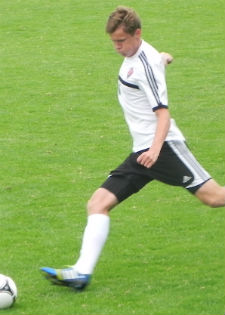 “I decided to commit to SIUE because I loved my visit and felt at home right away at campus,” he told TopDrawerSoccer.com. “The program is one that I know I can excel in, and the school is one that I am extremely excited that I will get a degree from. Also, I like how the program has a lot of support for its players whether on the field, or in the classroom.”

Formerly of the Vancouver Whitecaps Residency program and Canada’s U15 BNT, Libke has shown both aerial and passing prowess. The team’s history was another draw to him.

“The program has produced top players in the past, and I like how they are extremely dedicated to doing so,” Libke said. “I love the facilities they have at SIUE. The coaching staff is another key component of why I made my commitment as I know coach Scott Donnelly will push me to be a better player everyday.”

Because of what SIUE offered him, Libke had no hesitations of going to school so far away from home, and is eager for the new challenge in the American Midwest.

After receiving an invite to an Old Dominion ID camp, Quinn Liebmann decide to make the trip from Colorado to Norfolk, Virginia. It was there he found the ideal soccer fit.

“From the minute I arrived I felt right at home,” Liebmann told TopDrawerSoccer.com. “The city seemed perfect for me, just the right size, and I have always liked the east coast. I really liked the ODU campus as soon as I saw it. It is very modern. Plus, the soccer facilities and especially the game field are right on campus. When I learned ODU is a good school in terms of academics I knew this would be the place for me.”

His interaction with head coach Alan Dawson and positive camp experiences played a big part in Liebmann’s decision as well.

“Since I met him before the first camp my sophomore year of high school I have felt comfortable talking to him,” Liebmann said. “He is very down to earth and approachable and has a good sense of humor, which for me is a big thing. Plus, the camp was small and I felt the staff was really trying to coach me and evaluate me. Some camps feel like a factory. Also, even though ODU is consistently ranked in the Top 25 it feels like they are an up-and-coming program. So when they offered me a spot I knew ODU is where I wanted to go.”