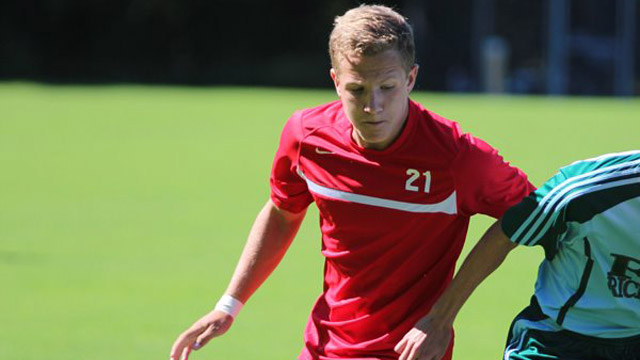 Nathan Kohl originally laughed off the idea of going to Michigan. He is from Ohio. He and his father are Ohio State fans. Michigan and Ohio do not mix. Oil and water.

But, Kohl, thanks to a helpful push from friend and teammate Rylee Woods, decided to take a visit to Ann Arbor anyway and was immediately sold on playing for the Wolverines.

“When I went there on a visit, I felt like I was home,” Kohl told TopDrawerSoccer.com. “It felt right. It is a great college town.”

Woods, who is also an Ohio State fan and a Michigan recruit for the 2013 class, chirped in Kohl’s ear about Ann Arbor and becoming a Wolverine.

“He helped through the process,” Kohl said about Woods. “He told me about Michigan and how nice it was.”

Kohl took an unofficial visit up there afterward and was sold on the prospect of playing against Ohio State in the future.

“Michigan’s facilities are top notch,” the forward said when asked about what set the Ann Arbor program apart. “The coaches at Michigan knew me a little better too.”

The 16-year-old made his verbal commitment last week to add on to a remarkably good year for the attacking talent.

Kohl won the Golden Boot at the 2012 Generation adidas Cup for the U17 age group in August. This fall, he has also been a key contributor for the Crew U18 squad in the Development Academy while playing up an age.

The target forward has professional aspirations and believes head coach Chaka Daley and his staff can help him reach that level.

He also revealed that he considered Ohio State, Michigan State, and Kentucky before picking Michigan.

Something special is being built at Furman.

Add another under the radar talent, as FC Dallas’ Marco Ortiz verbally committed to the South Carolina program last month.

Ortiz will be no stranger to the style of play the Paladins try to employ, possessing the ball and trying to attack. But off the field, the school’s campus also impressed him.

“What appealed me to the school itself is how beautiful everything was,” he said. “The campus has always been ranked as one of the top 5 most beautiful campuses in the country and I really think it deserves that.”

A hard worker from Southwest Virginia, Mitchell Williams is another in a small but determined group of players to find his way to a Division 1 program despite not playing in the Development Academy.

Williams realized that making the decision to play for SIUE was the right one.

“I chose SIUE because I thought at the school was a great fit in terms of size and in academic standards,” he told TopDrawerSoccer.com. “I also was drawn in by the school's support of the program, which makes it a great environment to play in.

“I am really excited to join SIUE because there is a common goal around the program, and that is to be a national contender, which I think is very possible under Coach Kallish.”

Tyler Swanner, a midfielder for St. Louis Scott Gallagher-Metro, committed to Wisconsin-Green Bay for the class of 2013.

Brendan Kissel, a midfielder for St. Louis Scott Gallagher-Metro, committed to Wisconsin-Green Bay for the class of 2013.

Tyler Allen, out of the Chivas USA Academy, committed to Point Loma Nazarene for the class of 2013.