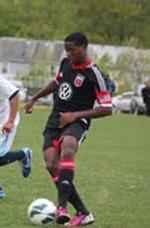 As one of the key contributors on one of the top scorings teams in the Development Academy, Julian Cummings was bound to have plenty of options at the collegiate level so his pick really came down to what he wanted.

“I picked Virginia because I was looking for a school that had a great soccer program plus high academic standards,” Cummings told TopDrawerSoccer.com about his commitment. “I’m considering studying business and they have one of the best business programs in the country.”

The proximity of the Charlottesville campus and the coaching from the Cavaliers’ staff really stood out to the 16-year-old from Fredericksburg.

“I felt like I would develop more as a soccer player and as a student at UVA and it was close enough and far enough from home. I also connected with the coaches and the players very well on my visits.”

The D.C. United U16 standout, who has seven goals in 24 academy games this season, is the fifth commit for the 2014 class for Virgina. He joins a quartet of local products in Emmanuel Scere, Jake Rozhansky, Chase Gasper, and Jefferson Caldwell.

Jake Areman didn’t need a lot of convincing to make his commitment to the powerhouse program at Maryland.

“Maryland was my dream school from the start,” Areman told TopDrawerSoccer.com. “On my initial visit to Maryland, I knew it was the right place for me. The academic and sports facilities were all very impressive. Maryland is not only a successful soccer program, but also a top academic school.”

One thing for sure is that the staff in College Park puts a lot of pressure and expectations on each class of players. In some instances that can scare players away, but it was one of the team’s traits that stood out the most.

“The competitive nature and the coaching staff is what most appealed to me,” Areman explained. “Every practice is treated like a game, and every game is treated like their lives depend on it.”

It’s not every day that a player from Idaho is plucked into the Division I soccer ranks, but Timmy Mueller caught the attention of Oregon State, and it didn’t take long for the forward to make his commitment.

“The school was very professional and the facilities exceeded excellence,” he told TopDrawerSoccer.com. “After meeting the team, they come off as a family and were very welcoming to me as a new recruit. I believe it will be a true family away from home.”

The 2012-13 Gatorade Player of the Year in Idaho, Mueller will bring a decorated club career to the Pac-12 program, as his 30 goals in the same year were most in the state.

Along with the academic demands Oregon State place on its students, the soccer program featured an environment that appealed to him.

“The soccer team was very friendly, yet worked hard during practice,” he said. “They challenged each other during practice in a way that was not dirty but helpful for game time situations.”

Forward Mario Da Silva (Weston FC) committed to Army for the class of 2014.

Midfielder Alex Underwood (Chicago Fire) committed to Denver for the class of 2014.