A leading scorer in the U14 age group last year with 33 goals from 30 games, Arda Bulut made the early decision to not go too far from home, committing to Stanford for 2017. 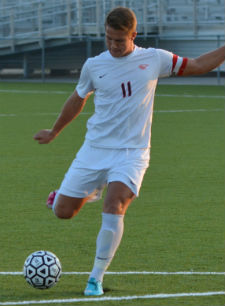 He made the commitment based upon the classroom as much as what the school offered him on the field.

“I decided to commit because I really like where the program and the school are heading, it felt like a nice fit for me,” Bulut told TopDrawerSoccer.com. “I also liked the academic rigor of the school.”

With the school at the top of his list from the start of his recruiting search, head coach Jeremy Gunn’s approach to the program was a major factor in his choice.

Stanford’s glut of academic options also appealed to the De Anza Force scoring ace, who is the program’s first verbal commitment for 2017.

A defender who takes pride in his leadership at the back, Zac Marquess knew that Nebraska-Omaha was the right place for him as soon as he stepped on campus.

“I immediately knew this was the place for me,” Marquess told TopDrawerSoccer.com. “I could not be more excited to join a program that is moving in such a great direction. Coach Mims and coach Walters have built a Division I program from the ground up, and the success since their first season four years ago speaks for itself. I think the program will continue to get stronger and will do well playing postseason soccer. The people on campus were amazing too. Some lady I didn’t even know stopped and got out of her car to help with directions. It feels like home.”

Picking the program came after seeing the culture and coaching staff up close, both which he took a liking to, not to mention the way the team tries to play on the field.

“I was extremely impressed with the style of play, as it fit right into what I enjoy,” Marquess explained. “Everyone works extremely hard for each other; it’s something you can’t describe in words.”

Marquess also thinks that the school is a hidden jewel of the Midwest, and is eager to jump-start his DI career next fall.

“The people there are so nice, and I feel like I will fit in right away,” he said. “The business school is very strong, and I enjoyed being able to meet with the dean of the school. Graduating with a business degree from Omaha will help me immensely. I am looking forward to staying in the Midwest.”

He’s the first verbal commitment to Nebraska-Omaha for next fall.