There seems to be a magnetic force, drawing some of the best players from the Pacific Northwest to top college soccer programs in North Carolina. 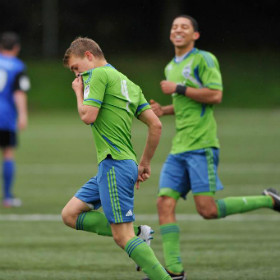 The pipeline continued recently, when Wake Forest picked up the commitment of Duncan McCormick, a box-to-box midfielder from the Sounders Academy.

“When I went to North Carolina to check out a couple of schools in that area last October, Wake Forest's campus, facilities and quality of play really caught my eye and no other school that I'm aware of could match that,” he told TopDrawerSoccer.com.

There were also some very unique traits of the team’s style of play that caught McCormick’s eye.

“Coach Jay [Vidovich] is one of the few coaches in college soccer who believes in the philosophy to ‘play’ soccer, rather than just kick and run type of play, which is seen throughout the NCAA,” he said. “Coach Jay knows how to create MLS ready players and he's shown that he has that ability by sending many players into the league. Becoming a pro is a dream of mine, and there isn't a better place in the country to go to achieve that dream.”

Another Academy product from the Sounders also clued McCormick in on what life is like at Wake.

“Throughout this process I talked to, Sean Okoli, who played on the Sounders Academy a couple of years ago and now attends Wake Forest, and he helped me make my decision. He made it clear that the team at Wake Forest is a family, and after everything, I wanted to be a part of that family.”

Clemson’s recruitment of Melvin, a left-footed, left back, dates back a few years.

“Since the summer going into my freshman year, I have gone to Clemson’s soccer camps every year and developed a strong relationship with Head Coach Mike Noonan and Assistant Coach Phil Jones,” Melvin told TopDrawerSoccer.com. “I immediately clicked with them and it was really the first college soccer environment I was exposed to, and that was just going to soccer camps. They had been evaluating my development over the past couple of years and everything just seemed to fall into place. So when I went on my visit a couple months ago, it topped the cake for me.”

Naturally, it was about more than just getting the chance to train at a high level during summers – there were plenty of other things that the youngster liked about what the program had to offer.

“The facilities at Clemson are top-notch and extremely impressive,” Melvin said. “They have an awesome staff and I can't wait to start working with them. The soccer environment at Clemson is amazing and I think it will be a great fit for me academically, socially and athletically.”

That was one of many positive traits that drew him to make the decision to play there this fall.

“I decided to commit to UMass Lowell because I felt at home,” he told TopDrawerSoccer.com. “The university is growing rapidly and achieving well-known status around the world. It's in the New England region and not too far from home. Massachusetts is a great place to go for school.”

The program will compete in the America East Conference in the fall, and Amaris will be a part of the team’s transition to a new level and a step up from Division 2. Amaris felt a strong bond with the team almost right away, and it’s something that could pay dividends in the fall.

“I felt very comfortable with my surroundings when meeting the coach and team,” Amaris said. “Coach [Christian] Figueroa is a young guy who I relate to very much so. I connected well with the team on the practice field and off of it. Also their style of play intrigued me as its similar to what I want to play in and want to grow in. The team likes to hold the ball for possession but when it's on, they play with flair.”

Molina becomes the third player from the De Anza Force U16 squad to announce his commitment to the Cal Poly Mustangs in recent weeks. Molina is a right winger on the squad that sits in first place in the Northwest Division.

“I knew Cal Poly was the place for me because it has always been one of my favorite schools and I loved the way Cal Poly likes to play,” Molina told TopDrawerSoccer.com. “They play similar to Barcelona.”

The tiki-taka flair of Cal Poly was all that Molina needed to see, as he said that it was the only school he considered.

David Levitsky, Nick Carroll, and Molina make up the current croup of commitments for the 2014 class for the Mustangs.

Forward Alex Portela (Met Oval) committed to Siena College for the class of 2013.

Forward Spencer Goldstein (Colorado Rush) committed to Army for the class of 2014.

Midfielder Brennan Goldsmith (PA Classics) committed to Loyola (MD) for the class of 2013.