UMBC is a program that has made significant strides in the past few seasons. Perennial contenders in the America East and making appearances in the NCAA tournament haven’t escaped the notice of local talent. 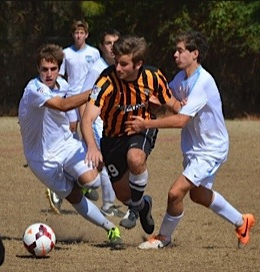 “I decided to commit to UMBC because it's close to home and the coaching staff and players seem like a family and a fun group of people,” he told TopDrawerSoccer.com. “The soccer program has had a lot of success in the past couple years and that has attracted me. Also I like the style of soccer that they play, which is a lot of possession.”

Word around town helped sealed the deal, as Gielen only heard good things about the school itself.

“UMBC is a great school and people I know that go their say that they love it,” he said.

Three players are verbally committed to UMBC for 2015.

When he first stepped foot on campus, and had the chance to see Virginia and the surrounding town up close, that was just about all it took to convince Simeon Okoro to verbally commit to the soccer program for 2015.

“After my first visit to Charlottesville, it became clear to me that UVA is where I want to be,” he told TopDrawerSoccer.com. “The combination of UVA's high academic standard, campus environment and traditions fit what I was looking for.”

Of course, the soccer program’s vaunted history and tradition was another factor that pulled him, along with a positive experience of the coaching staff and the team’s style of play.

“As an attack-minded player with a high work rate, the high quality and dynamic attacking style of soccer at UVa fit the attractive up-tempo style of soccer I enjoy playing. During my last winter prospect camp, coach Gelnovatch's hands on approach to teaching, attention to detail, and organizational discipline made UVa appealing to me.”

During his visit to the school, Okoro also got to see the way the student-athletes were treated, another huge plus.

“The level of academic support given to student athletes, the high quality facilities, the individualized approach to health, nutrition and fitness, and a flexible coaching philosophy predicated on the players' strengths are the factors that sealed my decision during my campus visit last spring,” he said.

Four players are verbally committed to Virginia for 2015.

When it came to making his college choice, there was plenty that convinced Michele Bottari to pick the in state ACC school.

“I decided to commit to Clemson because I feel like it will give me the best chance at going pro,” he told TopDrawerSoccer.com. “I love how competitive Clemson's soccer program is and I love the group of guys. Clemson is also a top 20 public university in the nation so that is a big plus as well.”

Bottari is the third reported verbal commitment to join Clemson next year.

Midfielder Nicholas Hinds (Plantation Eagles) committed to North Carolina for the class of 2016.

Midfielder Ryan Bellavance (FC Blazers) committed to Colgate for the class of 2015.