An athletic outside back who likes bombing forward into the attack, San Diego State appealed to Amon Frazier in part because the program showed that it cares about the person as well as the player. 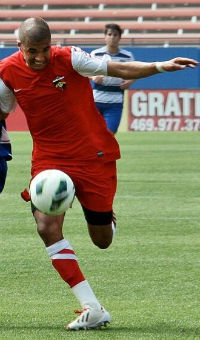 “I committed to San Diego State University because it felt like the right fit for me both athletically and academically,” he told TopDrawerSoccer.com. “The coaching staff made me feel at home and truly care about its players. Head coach [Lev] Kirshner told me that ‘We want to be a part of your life long after you’re finished here.’ He was sincere and that was all I needed to hear before I gave my verbal commitment.”

Frazier also liked the quality of opposition that he would go up against, as San Diego State is an associate member of the Pac-12 for men’s soccer.

“San Diego State University soccer and playing in the Pac-12 conference is at the highest levels in collegiate soccer,” he said. Coach Kirshner and coach [Matt] Hall are great technical soccer coaches, very personable, and the ‘family’ soccer environment they promote is what separated San Diego State from the rest of the college soccer programs that were recruiting me.”

A defensive-minded midfielder Noah Snyder took a quick liking to Duke’s soccer program, not to mention the university itself.

“I decided to commit to Duke because it is a great school with a great mix of academics and athletics,” he told TopDrawerSoccer.com. “It is a beautiful school in a great area.”

The lure of the ACC and a chance to go toe-to-toe with some of the top collegiate players was certainly another positive the program had to offer.

“The soccer program is on the rise and is competing in one of the best conferences in the country,” Snyder said. “The coaching staff is unparalleled. Coach [John] Kerr, [Michael] Brady, and [Bryan] Amos are all great coaches and great people. Also, even more top 25 soccer schools are entering the ACC in the coming years. That creates even more competition.”

“I loved the location and environment of the campus,” he said. “It is a beautiful school with very nice academic buildings. It is a fairly small school but is made big by the layout.”

Defender Matthew Nemeth (Davis Legacy) committed to Seattle for the class of 2014.

Forward Babatunji Osifeso (Baltimore Bays) committed to Campbell for the class of 2013.

Midfielder Tristan Thompson (Pateadores) committed to San Diego State for the class of 2014.

Goalkeeper Jeff Madigan (DC United) committed to VMI for the class of 2014.