A creative and technical midfielder from Mitsubishi Yowa SC in Tokyo Japan, Ken Akamatsu’s desire to play college soccer in the United States eventually landed at Denver for the class of 2015. 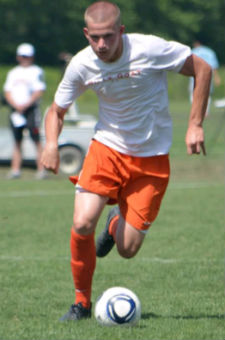 “Denver’s soccer program is outstanding,” Akamatsu told TopDrawerSoccer.com. “The program itself is one of the best in the country. The program is similar to a professional setting with great players, coaches, and facilities.”

Akamatsu is a midfielder with a good selection of passes who has competed in the U16 Japan National Team Training Program and has also finished in the Top 8 in the Takamadonomiyahai Premier League.

Christopher Flores, one of the key contributors to the top ranked New York Red Bulls U16 side last season, recently made his verbal commitment to Northeastern.

The CAA program beat out a number of programs in landing the commitment of one of the top recruits from the region.

“I decided on Northeastern because they have a great academic system and have a great sports team with a great staff that I felt was the perfect fit for me,” Flores told TopDrawerSoccer. “I also felt that the location was ideal and not too far from home.”

Flores scored six goals last season while making 25 appearances for the New York Red Bulls academy. He was only one of two players to make that many appearances on the season.

His play in the midfield was instrumental in leading Red Bulls to an 18-3-2 record on the campaign. Previously, Flores was one of the best players for Met Oval where he earned an invitation to train with some of the top academies in Italy.

All of the plaudits helped earn the attention of some of the best programs and had Flores looking across the country for his next step.

“Other schools that interested me were North Carolina, Michigan, St. John’s(m), and Wake Forest,” Flores said.

He also indicated that Duke, Georgetown, Lehigh, and Princeton were in the mix as well.

Flores is the fourth verbal commit for the Northeastern 2015 class. He joins Mohamed Kenawy, Andrew Lombard, and Kevin Carvalho.

Furman has produced some quality players over the past few years, and for defender Dalton Souder, it was the ideal place for him to take the next step in his playing career.

“I chose Furman because I felt like that's where I would best succeed as a player and as a student,” he told TopDrawerSoccer.com. “I think it is the best fit for me to achieve all my goals that I have set for myself.”

Along with the package the program offered, Souder took a strong liking to the team’s coaches.

“Coach [Doug] Allison and coach [Anthony] Esquivel are both great coaches and they play a possessive style which I really like and thrive in,” he said.

A strong and commanding presence in the 18, 6-foot-4, 220 pound goalkeeper Luc Barbe is taking his gloves from California to New York, where he’ll compete for West Point starting in 2015.

“I decided to commit to Army because I knew there I will be tested and pushed to the brink, making me the best person I can be,” Barbe told TopDrawerSoccer.com. “It also doesn't hurt that the facilities are world class.”

Barbe’s interest in possibly playing for a service academy sparked from a high school teammate’s decision to play at the Air Force Academy. His focus then turned towards Army after seeing the goalkeepers on the staff.

“I was initially drawn to this program because of its 'goalkeeper heavy' staff,” Barbe said. “The head coach, Russell Payne, is a goalkeeper who played at the collegiate level as well as professionally. The goalkeeper coach, Steve McAnulty, also played in college.”

“West Point is by far the nicest campus I have seen,” he said. “It looks over the ‘S-bend’ of the Hudson river in New York. On the outside West Point looks like an impenetrable castle, but on the inside everything is modern and high tech.”

Midfielder Andrew Samuels (West Florida Flames) committed to Maryland for the class of 2015.

Defender Garrett Wilson (Colorado Rush) committed to Gonzaga for the class of 2015.