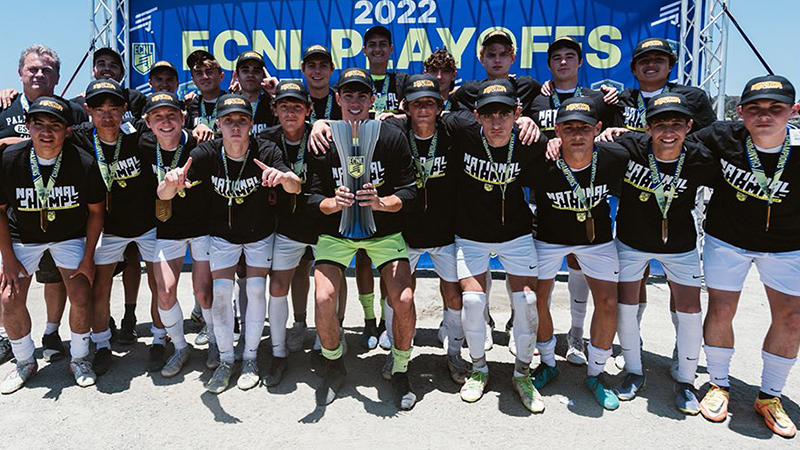 Check out which teams advanced to the National Finals below, plus a recap of Thursday's U19 title games -- and Regional League Champions.

Two teams walked onto the pitch for the U18/19 National Championship match between NTH-NASA and Crossfire Premier. Only one would walk off as national champions.

With some of the largest crowds of the tournament on hand, and each club with multiple supporter sections filled with parents and fellow teams from the club, the two sides kicked off Thursday morning, just 90 minutes from glory.

NTH-NASA and Crossfire Premier started the game feeling each other out. With lots of midfield play, the two teams methodically got into the game, attempting to find exploits and not doing too much to expose themselves on defense. While there were scoring chances for both ends, it was the defense that was doing the heavy lifting for the first 30 minutes of the match.

However, with the first half winding down, it was NTH-NASA that struck first. Battling for a 50-50 ball in the box, Joshua Acevedo went to the ground and was able to flick the ball past the goalkeeper to give the Atlanta side a 1-0 lead.

NTH-NASA carried their momentum through the remainder of the first half, holding onto the 1-0 lead with just 45 minutes to go.

Crossfire Premier came out firing in the second half, and it wasn’t long until they tied it up 1-1. Crossfire’s Ethan Pederson crashed the net on an early chance and headed the ball into the net to draw the score even, which lit a fire under his squad.

Just minutes later, the team took a 2-1 lead for their first advantage of the contest. Coming off a free-kick, the service went into the box, where Jackson Heisler redirected the pass into the net for the goal.

Crossfire Premier continued to press forward and sent bodies into the box, and eventually, that commitment to offense paid dividends. After a foul in the box, Jack Civitts stepped up to the spot for a penalty kick. He shot right, and while the NTH-NASA goalkeeper got a hand on the attempt, it wasn’t enough, and Crossfire had a 3-1 lead.

The answer is yes. In stoppage time, just seconds before the final whistle, Sam Hill knocked in a service from a corner kick with little resistance, bringing the score to 3-3 and forcing the game to extra time.

In two 20-minute halves, both sides did their best to generate scoring chances, but the backlines stood tall, limiting any possible scoring chance for the opposing attack. This was not a game that was going to be decided in extra time; it was destined for PKs.

PKs can be a very stressful time, for both shooters and goalkeepers. For Crossfire’s Jackson Ozburn, this is where he thrives.

Now, with hundreds of fans and scouts watching, Ozburn and Crossfire Premier was just one save away from a National Championship.

NTH-NASA’s shooter went for a chip shot into the top left corner. Ozburn dove left, extending his arms. The ball bounced off his hands and away from the goal line.

“We’ve worked hard all year to get to this moment, and it finally paid off,” said Crossfire Premier Head Coach Bernie James. “Ozburn was tremendous all week, saving eight of 10 penalties along the way. It was a great weekend with great competition, and congrats and thanks to the ECNL for putting on a fantastic tournament. We’re heading home with a trophy and I couldn’t be more proud of my team.”