In this weeks boys recruiting insider, TopDrawerSoccer.com chats with a U.S. U18 Men’s National midfielder, a pair of ranked attackers, and a defender from Michigan.

Want to be featured in the next Recruiting Insider series? Email us at recruiting@topdrawersoccer.com. 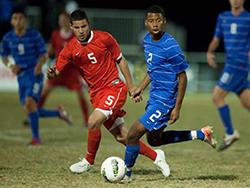 Cristian Cruz is torn about his college commitment.

As a member of the U18 Men’s National Team, he has his pick of institutions, but that has not made the decision any simpler.

“Overall the recruiting process has been very difficult for me,” Cruz told TopDrawerSoccer.com over email. “I still have no idea what college I want to attend. This is going to be one of the hardest decisions I've made.”

There is one factor that has remained on the front of Cruz’s mind: location.

“I want to stay in California,” Cruz said. “I've been in love with this state since the day I was born. I don't really want to go out of state.”

That said, the appeal of a certain Ohio school did make it just enough to crack the center midfielder’s top three list.

Halfway through the recruiting process, Yamann Sahlool has come away impressed from the lone visit he’s made to Ohio State.

“The soccer program there has been very successful in the past ten years or so,” he wrote TopDrawerSoccer.com. “The school was great and the coaching staff was very welcoming. The pitch there is also one of the best I've seen.”

Sahlool is in the search for the right blend of soccer and school as he eyes a program.

“Academics [are] very important to me, but along with that comes the quality of the soccer program,” he said. “I hope to find both of those in the school that I choose.”

Hoping to stay relatively close to his native Michigan – but not ruling out the West or East Coast – Sahlool is also looking at the likes of Princeton, Stanford and Georgetown.

And he’s hoping to make a commitment by this June.

As he goes through the college recruiting process, Ali Jawad has a clear picture of what he is looking for.

“I take three main factors into consideration when it comes to making a choice,” he wrote TopDrawerSoccer.com in an email. “First, making sure the academics are a good fit and reliable to have a good degree to fall back on after my playing career is over. Second, the fit has to be good for me in the soccer aspect, and making sure that the school is a place I feel comfortable playing and feel like I can mold into the team.

“Lastly, distance from home is also a factor, to make sure I won't get home sick and find the best suitable way to be comfortable away from my family.”

That search has led Jawad to a trio of visits to Bowling Green, Cornell and Notre Dame, and interest from programs in the MAC, Big 10, and Ivy League.

The three visits he’s made have all left an impression on him.

“All three had a lot of different things to offer and each campus was extraordinary and made you feel almost at home,” he said.

A talented attacking midfielder and forward, he is hoping to nail down a choice before the playoffs this summer, but isn’t going to rush into a hasty decision.

“I also want the fit to be right for the school, team, and myself,” he said. “There really isn't a time for a commitment, basically the best fit for all the parties involved in the decision.”

Crew Soccer Academy Wolves U16 is undefeated in Development Academy play this season, and the top team in our latest TeamRank update.

So no surprise the uncommitted players on Lars Richter’s squad are so coveted by colleges across the country.

Morris, who has been one of the most consistent pieces for Wolves, is another one with colleges lining up for him.

But the defender says he is still in wait and see mode.

“Overall, the recruiting process has been a lot of thinking and decision making,” Morris told TopDrawerSoccer.com. “So far I am still in the process of building my list and seeing if any more schools show interest in me.”

The Michigan-native said that he is looking for the right blend of a strong academic institute with a good soccer program.

“There are many factors that go into choosing the right college for me,” Morris said. “But the most important would have to be a school that’s great academically and also that plays a good style of soccer.”

Morris said playing close to home would be nice, but the appeal of warm weather also has him looking out west.

“I would love to attend UC Santa Barbara to play soccer as it as known as Soccer Heaven,” Morris said. “Also, Michigan and Cornell would be apart of my top 3.”