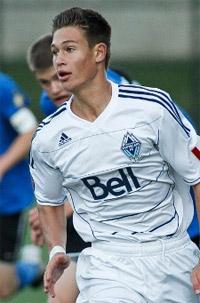 If there was one thing the Blue Devils struggled to do in 2012, it was score goals.

Boasting a strong defense, injuries up front killed Duke’s offense, but a recruit for the class of 2013 could change that, as Vancouver Whitecaps forward Brody Huitema recently committed for the fall.

“I had an immediate bond with the players and coaches at Duke,” Huitema told TopDrawerSoccer.com. “I felt I would receive the best coaching from coach [John] Kerr and coach Brady as they were both strikers themselves and have developed Hermann Award winners in the past. I know that they will guide my development and help me reach my full capability.”

Huitema’s numbers tell the tale of his scoring ability. In the 2011-12 season, he scored 23 goals in 25 games for Vancouver’s U16s, one of the highest totals in the nation. Halfway through the current Academy season, he’s hit 11 goals in 11 goals in the U18 age group.

The lure of a power conference was also significant in drawing the striker from the Pacific Northwest to North Carolina.

“I like that they're in the ACC which I feel is the most competitive conference and that they are a young team with tons of potential,” Huiema said. “It is where I will have the opportunity to start and make an immediate impact.”

Getting a team into the NCAA Tournament as a Top 16 seed is always going to attract positive attention, and such was the case for Finnlay Wyatt and VCU.

“I committed to VCU as a combination of several thoughts,” he told TopDrawerSoccer.com. “The program offered there is promising and very much so on the rise. The team is close knit and play for each other, and also the coaches have a strong relationship with the players.”

Head coach Dave Giffard, a former assistant coach at both Akron and Indiana, has taken the program to its current lofty heights, and the demands put in place by him and his coaching staff appealed to Wyatt.

“Coach Giffard offers a highly competitive yet promising program to play with the very best in the country and to improve as a player,” he said. “The environment that Coach Giffard along with the other coaches at VCU creates, drives the players on to become better individually and as a team.”

Interestingly enough, heading too far away from Richmond wasn’t really on the cards for Wyatt either, as he’s already living in the United States after moving here from England a few years ago because of his dad’s business. So that just helped sweeten the deal.

For Kareem Harris, the decision to commit to Siena was simply finding the right fit.

“I choose Siena because I felt that it was a school where I could succeed both on and off the field,” he told TopDrawerSoccer.com. “The soccer program has produced good forwards in the past couple of years and I feel that their playing style fits my game well.

“Academically Siena has a great business program and I liked the size of the campus. Also playing at Siena would give me a chance be on a team with my twin brother, Cadeem Harris, and the opportunity to play against some of the best schools in the northeast.”

Defender Marvin Hezel, from SC Freiburg (Germany), committed to Florida International for the class of 2013.

Midfielder Ryan Sullivan, from Kentucky Fire Jrs, committed to Clemson for the class of 2013.

Goalkeeper Randell Black, from San Jose Earthquakes, committed to California for the class of 2013.

Defender Michael Hinkson, from CASL Chelsea, committed to NC State for the class of 2013.