COLLEGE STATION, TEXAS – Day one of play in the Elite Clubs National League here at the College Cup Showcase, has completed, with teams doing their best despite frigid conditions.

That there was no precipitation beyond snow flurries is the best thing that can be said about the weather here Friday, as temperatures were well below freezing and a steady breeze made it feel even colder. Players commented on the difficulty of getting warmed up and the extra trepidation involved in blocking a shot. Kicking the ball was like kicking a rock as well.

In a U16 match, Adrian Solca’s Solar SC team took a hard-fought 1-0 victory over St. Louis Scott Gallagher. Solar forward Taylor Smith reminded onlookers why she is one of the top players in her age group, as she created the lone goal with a powerful run down the right followed by a dangerous cross into the penalty area. After a missed clearing attempt, Solar’s Lauren Heller got on the end of a shot to give the Dallas-area team the lead, which it never relinquished. 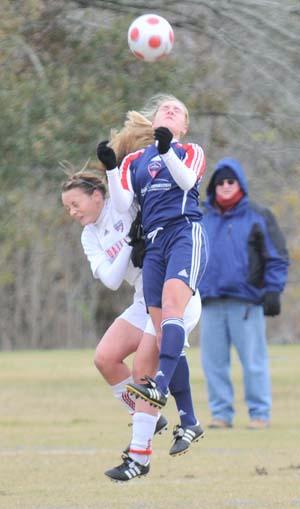 U17 FC Milwaukee vs FC Dallas
Solar got good play in midfield from Heather Magee and Erika Clarke helped Solar keep the ball for much of the game. For Gallagher, defender Madeline Friedmann played a solid game, putting in some good challenges and showing the ability to keep pace with Solar’s fast forwards.

In a U17 match, Jason Dewhurst’s Stars of Massachusetts earned an impressive 3-0 win over Southern California side Arsenal FC.

The U15 Eclipse Select kicked off in freezing cold temperatures Friday morning against the Bethesda Freedom. Eclipse had the upper hand at the start of the match thanks to midfielder Bryce Banuelos' good vision and confidence on the ball. Michelle Prokof made herself a nuisance to defenders with her pressure and scored a very composed game-winning goal. Meegan Johnston also helped keep the pressure up with her
aggressive attacking and ability to shoot from distance.

Bethesda seemed to draw some energy from the snow and fought hard in the second half. Marlo Sweatman's impressive first touch helped her utilize her speed. She took a number of shots with her best chance coming off a left-footed half volley that nearly made it into the back of the net. Goalkeeper Anna Cerf was strong on the defensive side as she was quick off her line and was able to come up with the ball in a crowd. Despite Bethesda's pressure, Eclipse maintained composure and the game ended 1-0 to Eclipse.

The temperature just before the D'Feeters '95 began play against CASL Spartan Elite Black was below freezing but it was easy to forget as soon as the two strong teams kicked off. Mary Elizabeth Breithaupt was great receiving the ball from back to goal and proved that she could finish as well when she slotted home the game's first goal, putting D’Feeters up 1-0. Bria Burciaga aggressively won the ball and used her speed and distribution skills to feed dangerous balls in to the forwards. Ashley York had a few opportunities to score as well, with her well-placed free kicks and shots from distance.

CASL was strong all across the board. Paige Reckert had a good game, playing simple and composed balls as well as being a vocal leader on the field. Claire Wagner was solid in the back and had a dangerous free kick. Bria Dixon was extremely quick and worked well to combine with other forwards. All of this pressure led to a late second half goal from midfielder Joanna Boyles to make the match a 1-1 draw.

Watch a highlight video from Friday.